Arjun Kapoor's Always Got Sister Anshula's Back, 'Literally' Since She Was A Baby

Both Arjun and Anshula are big fans of throwback photos 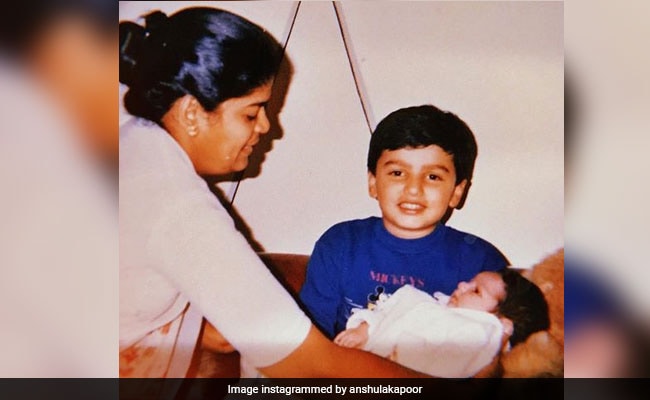 First, this photo of Arjun Kapoor as shared by sister Anshula will really make you go aww. Anshula Kapoor made the best use of throwback Tuesday and dug out an adorable photo of herself from when she was just a baby and his brother in a Mickey-tee to delight her fans and followers. On Instagram, Anshula Kapoor wrote: "He's always got my back, literally," and in the hashtags added: "Junior Kapoors" and "Luckiest girl in the world." In the photo, Arjun Kapoor, who must have been somewhat 7 or 8 years, can be seen smiling at the cameras with baby Anshula on his lap.

Arjun and Anshula's cousin Sanjay Kapoor is one of the first ones to drop the heart emoji on the blast from the past of the "junior Kapoors". Take a look at Anshula's post here:

Both Arjun and Anshula are big fans of throwback photos and post new ones every now and then to remember their mother Mona Shourie Kapoor, who died in 2012 after battling cancer. On Siblings Day, Arjun gave a shout out to Anshula by writing to his mom: "Mom, you gave birth to a special child. She wore matching WWE t-shirts just to be more like me and spent time with me... Guess what, my sibling turned out to be better than me and the best part of me... The day is gone but still... Happy Siblings Day."

Meanwhile on Rakhi, Anshula trolled Arjun for his fashion sense in the Nineties but wrote: "Love you to infinity, bhai."

Happy Rakhi to this trendsetter with the ugliest fanny pack @arjunkapoor. Even the parrot is questioning your judgement here, but I'm thankful that you've upped your fashion game since the 90s . Love you to infinity Bhai, thank you for being the best brother a girl could ever want, you're one in a zillion & you know it! #The90s #TheGoofballs #JuniorKapoors #MyNumeroUno

On the work front, Arjun Kapoor will next be seen in India's Most Wanted and also has films such as Sandeep Aur Pinky Faraar and Panipat in the line-up.