Arjun Kapoor's post for sister Anshula is just too cute 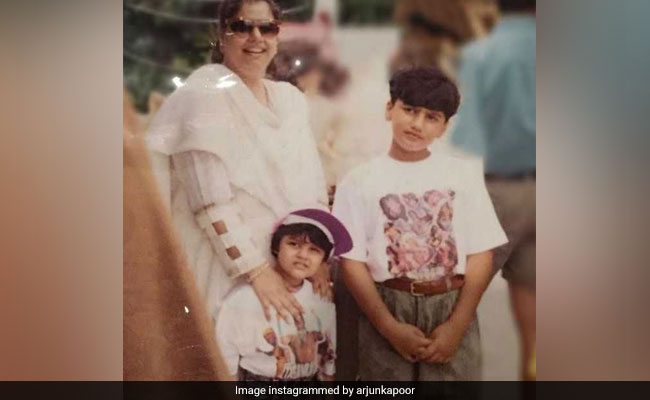 Arjun Kapoor might have been a day late in wishing his sister Anshula Kapoor on Siblings Day on social media but we can't overlook the fact that his post is absolutely adorable. The Ishaqzaade actor's post is extra special because it features his late mother Mona Shourie. Arjun shared a throwback picture of himself along with his mother and sister Anshula. In is post, Arjun recalled the times when his little sister Anshula used to wear WWE t-shirts to be like him and added that she "turned out to be better" than him. "Mom, you gave birth to a special child. She wore matching WWE t-shirts just to be more like me and spent time with me... Guess what, my sibling turned out to be better than me and the best part of me... The day is gone but still... Happy Siblings Day," wrote Arjun.

Arjun Kapoor and Anshula were born to Mona Shourie and filmmaker Boney Kapoor. Mona Shourie died of cancer in the year 2012, just a few months before the release of Arjun Kapoor's debut film Ishaqzaade.

Arjun Kapoor frequently relives his childhood memories by sharing pictures of himself along with Anshula on his Instagram profile. Take a look at some of the posts here :

Happy birthday Ansh... ur an extension of me, the best part of me & u always shall be the world to me... #happybirthdayanshula #bestsisterever #growinguptoofast

I know she s my sister n I can pick up the phone n tell her this... but strangely sometimes it's easier posting things it feels cathartic... it's ok @anshulakapoor u don't have to be an adult all the time u handle me the most useless man child in the world n u still manage to keep ur sanity it's fine we will take things one day at a time... I wish I could be more like her or just give u the time with her that u crave but the reality is I can't ever be like even if I try she was special & unique n u u are more an extension of her than I can ever be... love you. (I'll be home soon to trouble you) #Repost @anshulakapoor with @get_repost Come back na Ma . . Can you ever become too old to stop needing your mom's hugs? Being an "adult" is hard, but it sucks extra hard on some days. Today is one such day where all I want is to have kadi chaawal with mom & hear her laugh one more time. Miss you Ma. #AlwaysAndForever