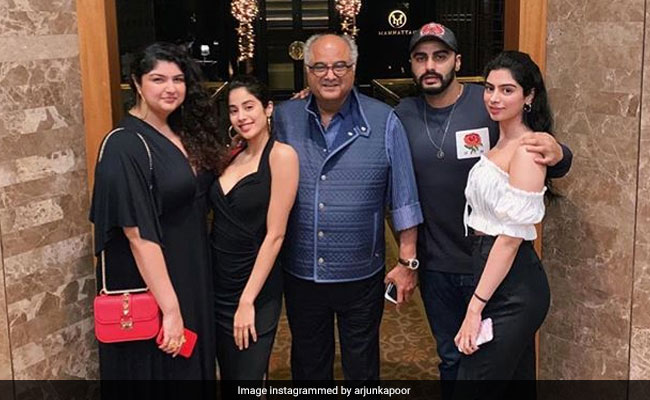 Arjun Kapoor with his family in Singapore (Image courtesy arjunkapoor)

Anshula Kapoor rang in her 26th birthday in Singapore with her family including her father Boney Kapoor, brother Arjun and sisters Janhvi and Khushi. Arjun Kapoor shared glimpses from her midnight birthday celebration on his Instagram timeline and accompanied it with a heartfelt message for his sister which read: "Happy birthday Ansh. You are an extension of me, the best part of me and you always shall be the world to me." He accompanied the caption with hashtags "#happybirthdayanshula" "#bestsisterever" and "#growinguptoofast". The photos shared by Arjun features himself with his sisters and his father. Arjun Kapoor's Instagram post has close to three lakh likes so far. Wishes came pouring in for the birthday girl in the comments section. "Happy birthday, Anshu," Sunita Kapoor commented on the photo.

Happy birthday Ansh... ur an extension of me, the best part of me & u always shall be the world to me... #happybirthdayanshula #bestsisterever #growinguptoofast

Janhvi Kapoor also shared a set of throwback pictures featuring herself with Anshula and Khushi. She captioned the photos: "Everyone's most special the reason we feel loved and safe. So thankful I have you to look up to. I love you more than you can imagine, always HBD bro."

Everyone's most special the reason we feel loved and safe. So thankful I have you to look up to. I love you more than you can imagine, always HBD bro

Anshula's chachu Sanjay Kapoor also wished her with a then and now photo of himself with the birthday girl. "Happy birthday darling," he captioned the photo. Maheep Kapoor also shared a set of throwback pictures and wished her on her birthday. Some of the photos also featured her daughter Shanaya.

The family trip to Singapore was planned in way that it incorporated Anshula's 26th birthday in the itinerary. Anshula along with father Boney Kapoor and Janhvi and Khushi flew off to Singapore days prior to her birthday. Anshula had been sharing fun photos and videos from her family trip on her Instagram timeline. Arjun Kapoor joined his family much later.

Here are photos and videos shared by Anshula Kapoor:

Taking a day off from adulting!

On the work front, Arjun Kapoor was last seen in Namaste England opposite Parineeti Chopra. The 33-year-old actor has Ashutosh Gowariker's Panipat, India's Most Wanted and Sandeep Aur Pinky Faraar in the pipeline.