Janhvi, Anshula And Khushi Kapoor Are Having A Blast In Singapore. Seen The New Video? 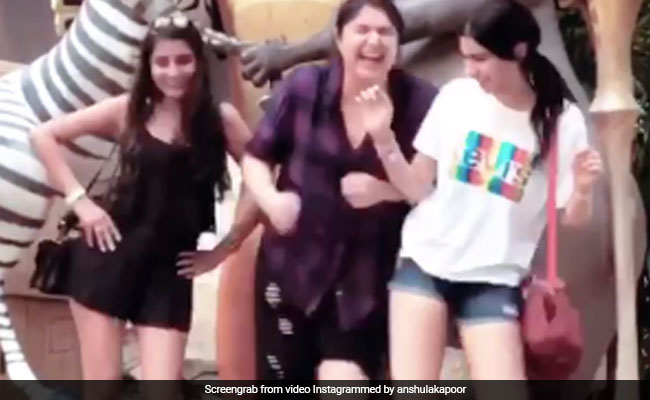 It's sometimes okay to give "adulting" a miss and let out the inner child in oneself and that is exactly what Anshula Kapoor's recent Instagram post is all about. Anshula, who is currently in Singapore with sisters Janhvi and Khushi, is having fun time with her siblings. Anshula shared a Boomerang video of herself with sister Khushi and a friend, which appears to have been taken at the Universal Studios, Singapore. Since Janhvi is missing from the frame, we are guessing that the video has been captured by her. "Taking a day off from adulting," Anshula Kapoor captioned her video. The family trip was planned in way that it incorporated Anshula's 26th birthday in the itinerary. Anshula Kapoor's brother Arjun will reportedly join her sister for her birthday celebrations in Singapore. Arjun was photographed at the airport on Thursday.

Taking a day off from adulting!

Earlier, Anshula Kapoor had shared a photo of herself with her sisters Janhvi and Khushi on her Instagram timeline and wrote: "Mine" and accompanied it with hashtag "birthday week".

Anshula is Boney Kapoor's daughter with his first wife Mona Shourie. Anshula's elder brother is actor Arjun Kapoor. Janhvi is the elder of Boney Kapoor and Sridevi's two daughters. Janhvi's younger sister is Khushi Kapoor. Janhvi and Anshula are often spotted together and frequently feature on each other's Instagram accounts.

What Janhvi Kapoor Learnt After A Week Of Self-Isolation: "Khushi Is The Cooler Sister"