Lakme Fashion Week: Suhana Khan Showed Up, With A Bunch Of Friends

Suhana was dressed in white jeans and a black halter-neck top, her simple outfit glammed up with designer accessories - Jimmy Choo bag and Saint Laurent booties New Delhi: Shah Rukh Khan's 17-year-old daughter Suhana Khan showed up at the Lakme Fashion Week over the weekend with a bunch of friends and has occupied a spot on the trends list ever since. Suhana was dressed in white jeans and a black halter-neck top, her simple outfit glammed up with designer accessories - Jimmy Choo bag and Saint Laurent booties. Suhana posed with her posse, which include actor Chunkey Pandey's daughter Ananya and nephew Ahaan - both believed to be aspiring actors, as is Suhana. It's not clear which designer's show the teens were attending. See pictures here: 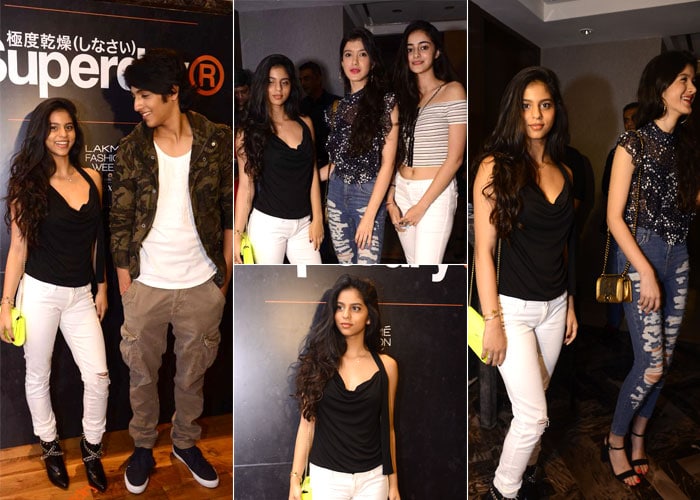 Suhana with her friends at the Lakme Fashion Week

Ananya and Ahaan are also believed to have been with Suhana Khan when she was mobbed by the paparazzi at a screening of Salman Khan's film Tubelight recently. Footage and pictures of the teen trying to not have her photo taken went viral. Suhana, the second of Shah Rukh and Gauri Khan's three children, has announced her intentions of following dad into a career under the arclights and is an active participant in theatre. Her famous father says he has no objection to Suhana's acting ambition and wants her to make it on her own. Suhana's elder brother Aryan, 19, is studying film at the University of Southern California.

Lakme Fashion Week ended on Sunday with a bang-up finale from Manish Malhotra, who put Jacqueline Fernandez and Aditya Roy Kapur on the ramp and a galaxy of stars, including Sridevi and her daughter Khushi, in the front row. See pictures: Celebs at the Lakme Fashion Week