Koffee With Karan 7: Punjabi Munde Vicky Kaushal And Sidharth Malhotra Up Next. Special Mentions For Katrina Kaif And Kiara Advani 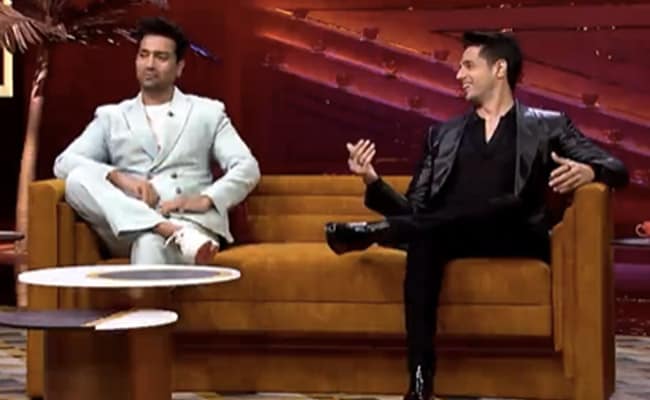 A still from Koffee With Karan 7 promo. (courtesy: karanjohar)

Karan Johar has dropped a promo of his upcoming episode of Koffee With Karan Karan 7, and this time two Punjabi Mundas - actors Sidharth Malhotra and Vicky Kaushal, are in the house. The clip starts with Karan Johar saying, "The men of the moment...two regular Punjabi boys". As the video continues, KJo tells Vicky that it was a very "momentous" KWK last time. On this, Sidharth says, "Iska toh roka hua tha yahan pai". Well, if you don't remember then, let us refresh your memory, last season when KJo asked Katrina Kaif with which actor she would like to work, the actress named, Vicky and the reason: "she might look good together with him on screen". Soon after, the duo started dating and got married in December 2021.

Coming back to the promo of the upcoming episode of Koffee With Karan, Sidharth spills the beans on his rumoured relationship with Kiara Advani and on his marriage plans (with Kiara). Karan Johar says, "So now you are seeing Kiara Advani, any future plans?" The actor replies, "I manifesting it today..." However, Karan Johar intervenes and says, "that you are marring Kiara Advani?" On hearing this, Sidharth is taken aback, while Vicky joins Karan Johar in teasing.

Seeing the promo, it seems the episode is going to be fun with Vicky and Sidharth adding the Punjabi tadka.

Sharing the post, Karan Johar captioned it as: "They're the men of the moment and they're bringing the full Punjabi feels to the Koffee couch! Manifesting a spicy brew this time around".

Soon after Karan Johar shared the post, the excited fans flooded the comment section. A user wrote, "Definitely not missing this episode Gonna be a bomber  waiting for it to be out," while another wrote, "Oh I can't wait to watch this".

The upcoming episode of Koffee With Karan will air on Disney+Hotstar on Thursday (August 18).