"You are amazing, I will call you back after the show," Kriti Sanon told Prabhas 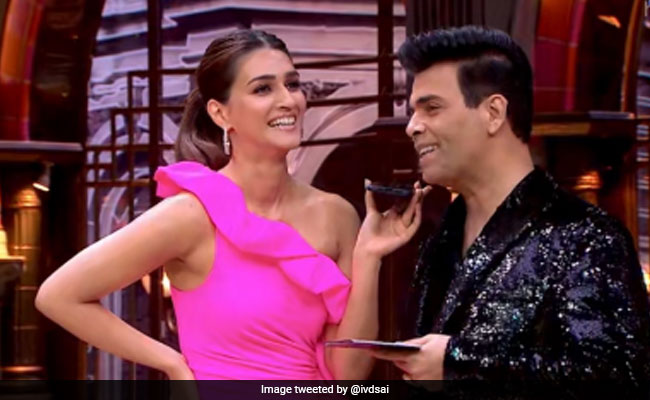 Kriti and KJo in a still from the show. (courtesy: ivdsai)

The new episode of Koffee With Karan 7, featuring Kriti Sanon and Tiger Shroff, was all things fun. Be it the Rapid Fire round, the 'Koffee Bingo' or the final buzzer round. During the final segment of the show, the stars are required to call up fellow celebrities and they are required to say "Hey Karan, it's me" on the show. Kriti Sanon called up he Adipurush co-star Prabhas, which won her 2 points and also the Internet's heart. The conversation between Krirti and the Baahubali star all but eclipsed everything else that happened on the episode. When Prabhas said, "Hey, Karan it's me," Kriti told the actor: "You are amazing, I will call you back after the show." To which Prabhas replied, "Okay, take care."

Just in case it wasn't clear, here are some tweets that reflect how much Twitter users loved the moment. "One of the best moments this season was the conversation between Kriti Sanon and Prabhas," wrote a Twitter user. "This is literally so cute," added another fan. "My day made. Only good thing happened in Koffee With Karan 7."

"You are amaaaaazing, I will call you back after the show" - #KritiSanon

"Okay Take careeee." and the shy smile of #Prabhas#Adipurush just keeps getting better for me #KoffeeWithKaran7pic.twitter.com/vWZgQkNoUM

Yohoooo my Barbie #KritiSanon called my favourite darling #Prabhas
He lifted her call with in seconds
My day made only good thing happend in #KoffeewithKaranSeason7pic.twitter.com/O0RLc9FmB0

This is Literally so cute ... @kritisanon called #Prabhas in Koffee With Karan Show ... I can't wait for their on screen chemistry in #Adipurush#KritiSanonpic.twitter.com/pEnV8mpwlR

You are Amazing Prabhas - @kritisanon#Adipurushpic.twitter.com/8EJ6gsVuNP

Adipurush, starring Prabhas, Kriti Sanon, Saif Ali Khan and Sunny Singh, will release in Hindi, Tamil, Telugu, Kannada and Malayalam in theatres this year. The film was slated to release on August 11 this year. However, the makers shifted its release date to avoid clash with Aamir Khan's Laal Singh Chaddha, for which the actor thanked the makers of Aadipurush. It has been directed by Om Raut.