Koffee With Karan 7: Ishaan Khatter also revealed the "most annoying" this about Katrina Kaif 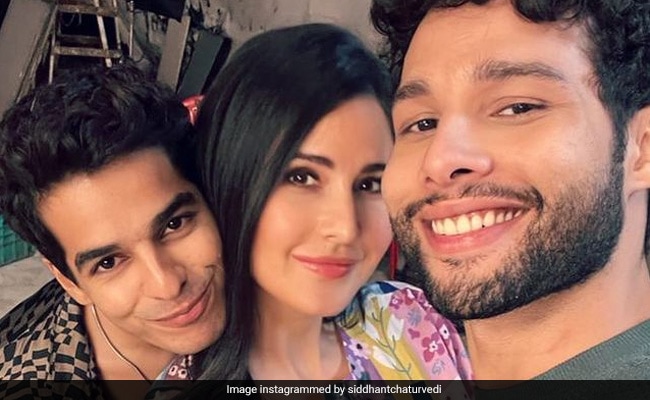 Katrina Kaif, Ishaan Khatter and Siddhant Chaturvedi lit up the sets of Koffee With Karan 7 and how. The Phone Bhoot stars ensured that everyone had a great time on the show and they delivered. During the episode, we learnt that Siddhant Chaturvedi did try to flirt with Katrina Kaif for 3 days on Phone Bhoot sets but she just didn't see it. When asked, "Between Ishaan Khatter and Siddhant Chaturvedi, who is the biggest flirt?" The actress said, "Maybe not just with me so I would say neither." Ishaan quickly added, "If I may, the first 3 days, Sid had his flirt game on." To this Siddhant added, "But she was not looking at me. She was looking away."

Siddhant Chaturvedi and Ishaan Khatter also spoke about working with Katrina in the film. "She is a bro. I mean... she is amazing," said Siddhant Chaturvedi. Ishaan Khatter, recalling the first day Katrina came to the film's set, said, "I do remember actually distinctly with Katrina on set. We had been shooting and then Katrina walks in on set and we have this haphazard kind of set situation in Film City. So Katrina walks in on set and the vibe just goes...Changes. It's like pura mahaul hi badal gaya hai. It's like we could hear whispers of Kat coming on set. Katrina is coming and everyone was like...We were like what's going on here?"

Siddhant also said that he wanted to be invited to Katrina and Vicky's wedding. "I'm so single that Ishaan too turned single by being with me. I'm so single that the only reason I wanted to be invited for Katrina's wedding was so that she could introduce me to one of her sisters." Karan Johar asked if he found them hot and the actor responded by saying he did find them "pretty."

Meanwhile, Ishaan Khatter revealed one thing about Katrina that annoys him the most. "She will be speaking to you and she genuinely listens right when you speak which is lovely, when you're having a conversation. Looking into your eyes. Except when she stops listening. And it can happen at any given point. So you're speaking to Katrina Kaif and suddenly you're speaking to a wall. Like there's no one there, there's no person. Like, she is looking at you, but she is looking through you," said Ishaan.