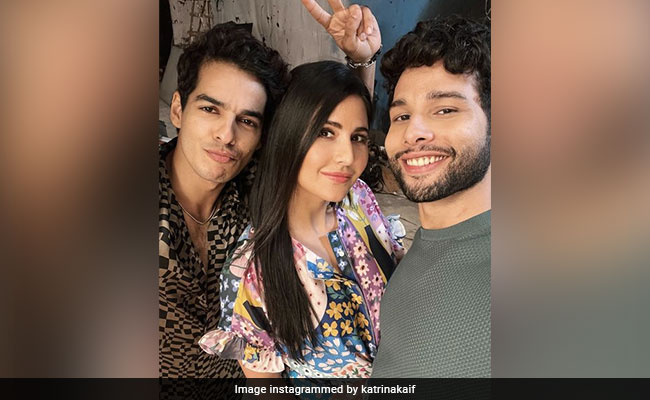 Katrina Kaif knows how to make work look like one big party. And this time around, she has her Phone Bhoot co-stars Siddhant Chaturvedi and Ishaan Khatter to thank for all the extra laughs. Late on Sunday, the Bollywood superstar shared a post featuring her alongside Ishaan and Siddhant, all looking their fashionable best for what appears to be the promotions of the film. The post begins with a video of the three actors flexing their muscles and being cool as always. This is followed by a selfie of the trio smiling for the camera. Sharing the images, Katrina Kaif said, “Back with my (phone and ghost emojis -- Phone Bhoot) boys.”

Replying to the post, Siddhant Chaturvedi dropped one of his famous poems in praise of Katrina. He wrote, “Rickshaw ke hote hain teen pahiye. Katrina kaif sabse Sahi hai.” Agreeing with Siddhant's assessment of just how awesome Katrina is, the film's producer Ritesh Sidhwani said, “Siddhant Chaturvedi, I agree,” with a heart emoji.

Siddhant Chaturvedi also shared the image and video with the caption, “On our way!#PhoneBhoot.”

A few weeks ago, Katrina Kaif shared a poster of the film on Instagram, much to the delight of her fans. In the caption, she said, “Ringing in with an update. #PhoneBhoot will now release on 4th November at cinemas near you.”

The poster features Katrina Kaif in leather pants and a graphic skeleton t-shirt. She also has a fortune ball in front of her. Meanwhile Ishaan Khatter has a skeleton hanging over his head. Siddhant Chaturvedi completes the motley crew, sitting with a skeleton by his side.

Take a look at the poster below: