"Personally, I am a very different person. So, I may not react the same way she does because I did not grow up that way," said Kiara Advani 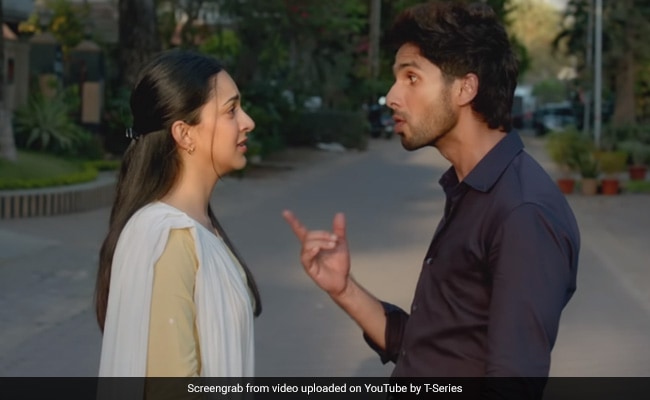 Kiara Advani in a still from Kabir Singh (courtesy YouTube)

Kiara Advani, who played the role of a naive and subdued woman-in-love in Kabir Singh, revealed how "different" she is from Preeti (her onscreen role), in an interview with Pinkvilla. For the uninitiated, Kabir Singh received massive criticism for appearing to justify violence and abuse in the garb of love. The portrayal of the protagonist, played by Shahid Kapoor, has been burnt to shreds by critics for being misogynistic and sexist. In his review of Kabir Singh for NDTV, Saibal Chatterjee wrote: "Kiara Advani is trapped in a role that requires her to be no more than a sounding board designed for periodic ego massages for the male protagonist."

Now, Kiara was particularly asked if she would behave the same way that Preeti did in Kabir Singh, when in love: "Personally, I am a very different person. So, I may not react the same way she does because I did not grow up that way; my mind-set and environment are different. The kind of person Kiara is, it is very different from Preeti. I wouldn't have done so many things that she did but when I was playing her, I couldn't let Kiara's thought cloud Preeti. I played her as a character and detached. As an actor, that was my process," Pinkvilla quoted Kiara as saying.

Describing Preeti and Kabir Singh as "extremely flawed", Kiara added that the primary focus of the story of the intensity of their love: "It is a perspective of the director. Each of us was aware of how is he telling the story and we believed in it. Maybe if someone else made it, he or she would do it differently, but at the end of the day, everything is fictional. No one is asking you to be like Preeti or Kabir. They are extremely flawed characters. I think it is the love story which everyone related to. At the end of the day, love is love."

Kabir Singh is directed by Sandeep Reddy Vanga, who also helmed the Telugu version of the film Arjun Reddy, starring Vijay Deverakonda. When Kabir Singh was subjected to criticism after its release, the director justified his film time and again, which further enraged audiences and critics alike. When asked to comment on the director's defence of Kabir Singh, Kiara told Pinkvilla: "Everyone is entitled to their opinion. Personally, for me, it will be a film which will be special to me. The character was obviously very different from what I am. Getting into the debate of what is right or wrong, I don't know... I wouldn't want to enter that position. Everyone has said what they wanted to. The movie received feedback which was both overwhelming and strong. I think it started a conversation."

Kabir Singh turned out to be Google India's Most Searched Film of 2019. On the work front, Kiara Advani stars in recent release Good Newwz, which is currently in theatres. Kiara also has films such as Laxmmi Bomb, Indoo Ki Jawani, Bhool Bhulaiyaa 2 and Shershaah in her line-up.