"All day every day I think this is what you do with reels," wrote Katrina Kaif 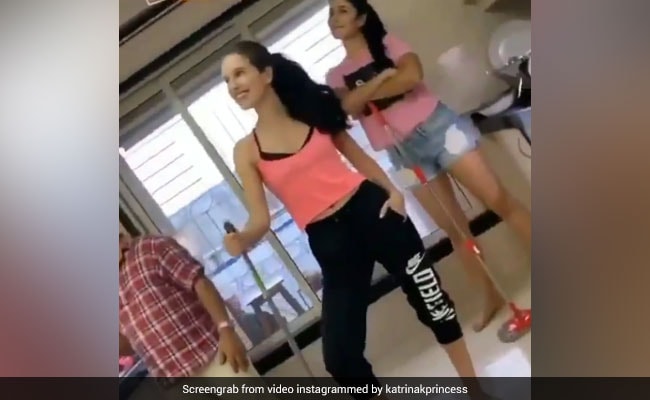 Isabelle and Katrina in a still from the video. (courtesy: katrinakprincess)

Katrina Kaif and her sister Isabelle were quick to experiment with the Instagram Reel feature. The Bharat actress shared a small video, in which she along with Isabelle can be seen having a good time. The video had snippets of Katrina and Isabelle cleaning, laughing, fighting and posing with their mops and brooms as Benee's Find An Island plays in the backdrop. An excited Katrina Kaif wrote while sharing the video: "All day every day I think this is what you do with reels." She accompanied the post with the hashtag #feelkaroreelkaro.

During the lockdown, the actress shared pictures and videos of herself doing household chores along with her sister Isabelle. She shared a video on her Instagram profile, in which she could be seen cleaning her house with a broom. She captioned the post: "One day at a time guys...We all gotta do our part...apparently Isabelle's part is to give commentary and pro tips while seated. Gotta mix it up...This is seriously good exercise BTW."

Earlier this year, we got a glimpse of the Bharat actress doing the dishes. She shared a video, in which she said: "Since the house helps are also practicing self-isolation, Izzy (Isabelle) and I have decided to take turns to do the washing up. I thought I would do a little professional tutorial."

Katrina Kaif was last seen in Ali Abbas Zafar's 2018 film Bharat, co-starring Salman Khan and Disha Patani. She will next be seen in Rohit Shetty's Sooryavanshi, alongside Akshay Kumar.

Isabelle will make her Bollywood debut with Karan Lalit Butani's Kwatha. She will star opposite LoveYatri actor and Salman Khan's brother-in-law Aayush Sharma.