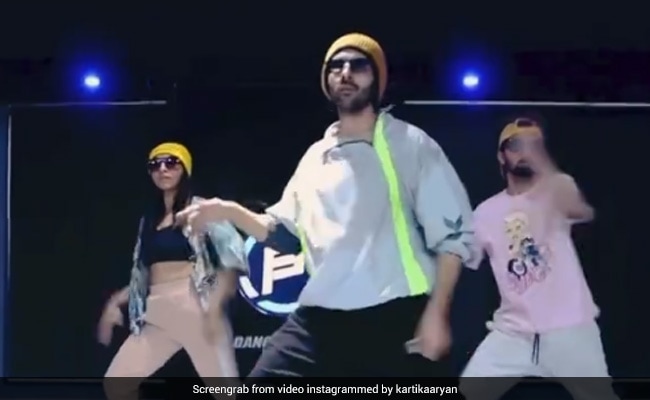 Kartik Aaryan in a still from the video. (courtesy kartikaaryan)

Just when we thought it was almost impossible to match up to Allu Arjun in the super hit track Butta Bomma, Kartik Aaryan showed up with a brand new video and we are mighty impressed. The actor, on Thursday, danced to the viral Telugu track that features Allu Arjun and Pooja Hegde and it is pretty good. Also, no clichés in Kartik Aaryan's caption, so he wrote: "Dance like ______ ? ('No one's watching' mat likhna )." Noted, Kartik! He added the hashtags #Buttabomma and #DanceLikeKartikAaryan to his post. The comments section of his post was filled up with shout outs from fans and friends. To begin with, Varun Dhawan dropped flame emojis. "Wait a hot second, where has this talent been," added another Instagram user. Choreographer Piyush Bhagat, who features in the video with Kartik, commented: "Woahhhh! Had so much fun doing this with you. You killed it brother."

Allu Arjun  has starred in films like Bunny, Happy, Desamuduru, Parugu, Arya 2, Vedam, Varudu, Badrinath, Race Gurram, Rudhramadevi and Sarrainodu and Duvvada Jagannadham. Allu Arjun was also seen in Ala Vaikunthapurramuloo, in which he shared screen space with Pooja Hegde.

The actor will next be seen in Bhool Bhulaiyaa 2, co-starring Kiara Advani and Tabu. He also signed the second installment of the 2008 film Dostana, alongside Janhvi Kapoor and newcomer Lakshya Lalwani. However, the makers of the film, citing professional reasons, announced a few months ago that the cast will be revised. The revised cast has not been announced as of now. The actor announced his new project Dhamaka on his 30th birthday.