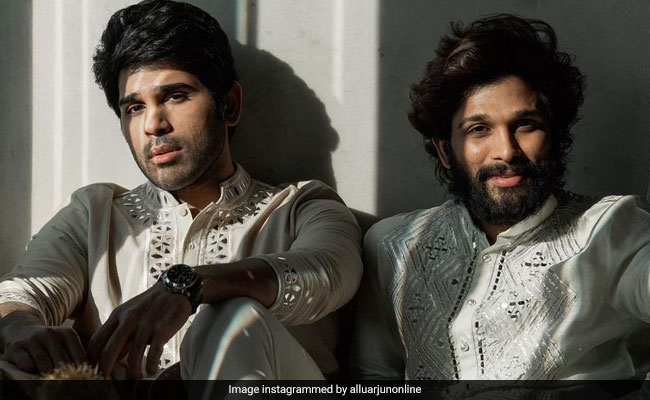 Telugu actor Allu Sirish turned a year older today. His brother and actor Allu Arjun has wished him a happy birthday on social media. On Sunday, Allu Arjun, who share a close bond with Allu Sirish, posted a picture of himself and his "sweetest brother" on Instagram. In the picture, Allu Arjun can be seen happily posing with Allu Sirish. They are twinning in white kurta pyjamas. While Allu Arjun is flashing his smile, we couldn't ignore Allu Sirish's intense look in the frame. The Arya actor also wrote a heartwarming note for his brother in his post.

Allu Arjun wrote, "Many many happy returns of the day to my sweetest brother who is my biggest moral support. Wish you a wonderful day and a lovely year to come."

Allu Sirish sent a card and desserts as the gift to brother Allu Arjun on the occasion as he won't be able to celebrate his birthday with the Yevadu actor amid the COVID-19 pandemic. Allu Arjun's Instagram stories say it all. Allu Arjun posted a picture of the gift that he received from Allu Sirish and thanked him in the post. The Sarrainodu actor also shared a clip in which he can be seen unboxing the gift.

The note on the card read, "Dear Bunny & Sneha, I would have loved to celebrate my birthday in your presence, but the current situation has forced us to stay apart physically. I look forward to many more good times spent together. Until we're able to meet again and celebrate in person again. I wanted to leave you with a little token, remembering our good times. Hope you and your loved ones stay safe and happy! Allu Sirish.''

Allu Arjun frequently shares pictures with his brother Allu Sirish on his Instagram handle. The pictures also feature their elder brother Venkatesh. Take a look at a few of his posts here.

Allu Arjun had tested positive for COVID-19 in April. On April 28, Allu Arjun had shared the news with everyone on social media. In his statement, he wrote, "Hello everyone, I have tested positive for covid. I have isolated myself at home and have been following all the protocols. I request those who have come in contact with me to get tested. Stay home, stay safe and get vaccinated when you get the chance. I request all my well-wishers and fans not to worry about me as I am doing fine."

Allu Arjun had tested negative for COVID-19 in May after spending 15 days in quarantine at home.

In terms of work, Allu Sirish has appeared in films such as Gouravam, Kotha Janta, Srirastu Subhamastu, and Okka Kshanam. Allu Sirish is now gearing up for film Prema Kadanta.The upcoming movie is directed by Rakesh Sasi of Vijetha fame.

Meanwhile, Allu Arjun was last seen in Ala Vaikunthapurramuloo in 2020. He now has Pushpa coming up.