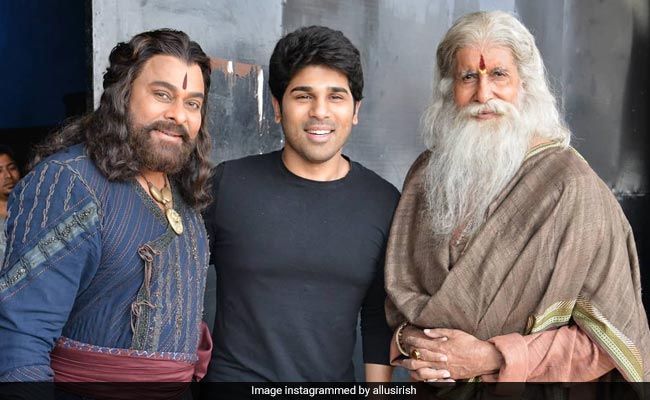 Allu Sirish with Chiranjeevi and Big B. (Image courtesy: allusirish)

It's not every day that we get to see "two legends" in a single frame, which is why Allu Sirish's latest Instagram entry demands everyone's attention. In case you are wondering who these "aforementioned legends" are, we are referring to Chiranjeevi and Amitabh Bachchan. On Friday, the 32-year-old actor shared a picture from the sets of the film Sye Raa Narasimha Reddy, in which both Big B and Chiranjeevi could be seen dressed in their respective get-ups from the film. Allu Sirish used the best set of words to describe his fan boy moment with the veteran actors. An excerpt from his post read: "Some moments freeze in time."

Sharing the picture on his Instagram profile, the actor wrote: "My moment, with the two legends - Megastar Chiranjeevi garu and Amitabh Bachchan saab on the sets of Sye Raa Narasimha Reddy. Lucky and blessed."

Sye Raa Narasimha Reddy is a period drama, which is based on the life of revolutionary Uyyalawada Narasimha Reddy, who was the first rebellious force against British Raj. The film has an impressive ensemble cast. Other than Amitabh Bachchan and Chiranjeevi, the film also features o includes Tamannaah, Kichcha Sudeep, Nayanthara and Vijay Sethupathi.

The film went on floors in Hyderabad in the year 2017. Sye Raa Narasimha Reddy is being directed by Surender Reddy and it is being produced by Chiranjeevi's actor-son Ram Charan. The film is scheduled to hit the screens on October 2.