Chiranjeevi On Performing Action Scenes For Sye Raa Narasimha Reddy: 'It Was A Challenge'

"Ram Charan and Surender Reddy made me work hard for the stunts," said Chiranjeevi 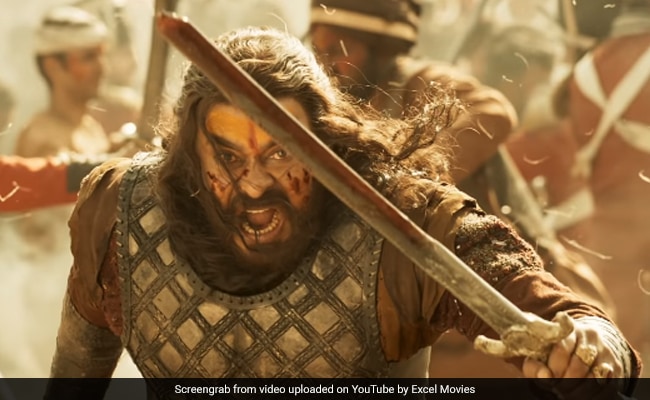 Chiranjeevi in a still from the film. (Image courtesy: YouTube)

South star Chiranjeevi, who plays the role of a freedom fighter in his upcoming film Sye Raa Narasimha Reddy says it was "challenging" for him to perform the action sequences for the film at the age of 63, reported news agency PTI. Chiranjeevi will turn a year older on Thursday. The superstar said that his actor son Ram Charan, who has produced Sye Raa Narasimha Reddy, did not compromise and made him work hard for the stunts. "It was a challenge. Ram Charan and Surender Reddy (director of the film) made me work hard. While I was hearing the subject, I was like, 'We can have a duplicate or morph my face and do the action bit.' But these guys did not compromise and made me do the fight scenes," Chiranjeevi told PTI at the Hindi teaser launch of the film.

The actor added that even though he had a shoulder surgery, he did the fight and horse riding scenes and enjoyed it. "I had a bad shoulder that I got operated but then also, they (Ram Charan and Surender Reddy) made me do fight and horse riding scenes. But I did cherish this experience and enjoyed doing the film. I saw the result and I am hopeful people will cherish it too," he said.

Speaking about his comeback in the Hindi cinema, Chiranjeevi said he is yet to be offered a proper content. He added: "I did not get proper content to come back. I had stopped acting, when I went into politics, so for ten years I was there. Then again from 2016-2017, I started working. With Sye Raa Narasimha Reddy, I felt I should come back to Bollywood."

Talking about Sye Raa Narasimha Reddy, in which Chiranjeevi plays freedom fighter Uyyalawada Narasimha Reddy, the actor said that the story deserved to be told to the people across India. "It is an untold story of an unsung hero, so I wanted to bring this content as pan-India because all the Indians should know about Sye Raa Narasimha Reddy. I feel it is my responsibility to make it. This story was lying with me since almost a decade and a half. Because of the budget constraints I couldn't dare to make this film earlier," he said.