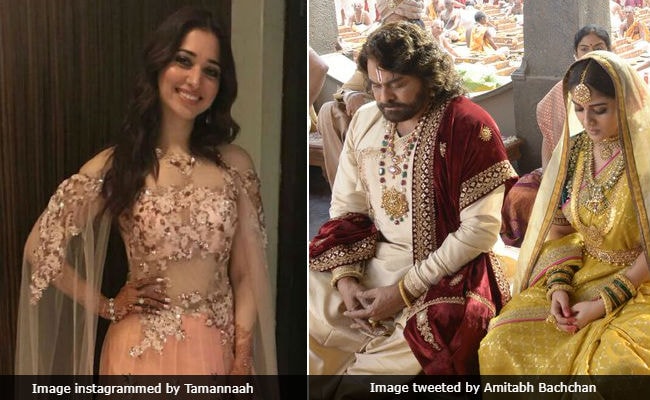 Tamannaah at an event in Mumbai. Chiranjeevi in a film still. [Images by Tamannaah (L) and Big B (R)]

New Delhi: Actress Tamannaah Bhatia joins the cast of Chiranjeevi's Sye Raa Narasimha Reddy, reports news agency IANS. Speaking to IANS, the Baahubali actress said: "It's a great honour to be sharing the screen space with two of my favourite actors - Chiranjeevi and Amitabh Bachchan (he has a cameo in the film)." The film is a biopic on late Uyyalawada Narasimha Reddy, who is believed to be one of the first freedom fighters. He rebelled against the British rule 10 years before than the First War of Independence of 1857. Tamannaah told IANS that for her it's a matter of "national pride" to feature in this film. "Biopics have always been a priority for me and since the film revolves around a freedom fighter. It's a matter of national pride to contribute to this project," she said.

Sye Raa Narasimha Reddy is produced by Chiranjeevi's son Ram Charan, with whom Tamannaah co-starred in 2012 film Racha. Amitabh Bachchan has already filmed his portion for the project last month. He posted a few pictures from the film's sets on social media:

Meanwhile, Tamannaah hasn't revealed the details of the character she plays in the film but she told IANS: "I will be undertaking a lot of research for my role as there is very less material available online and I want to keep this as real as possible." Sye Raa Narasimha Reddy will release in Telugu, Tamil and Hindi.

Promoted
Listen to the latest songs, only on JioSaavn.com
Apart from Sye Raa Narasimha Reddy, Tamannaah Bhatia has the Telugu remake of Kangana Ranaut's Queen up her sleeve.