The film feature Amitabh Bachchan in a cameo role 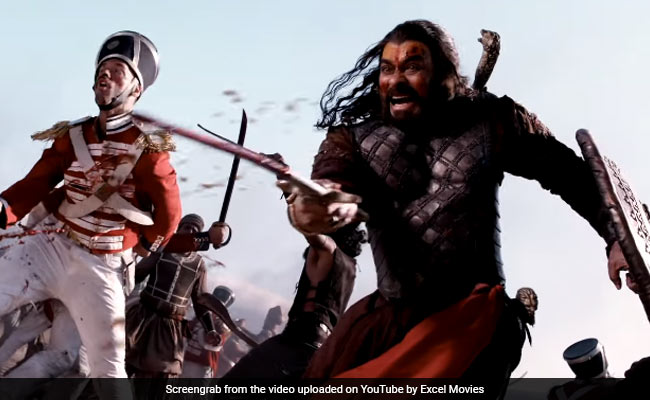 Chiranjeevi in a still from the video. (Image courtesy: YouTube )

Ram Charan's Sye Raa Narasimha Reddy, which features his actor father Chiranjeevi, along with Tamannaah, Niharika, Vijay Sethupathi, Kichcha Sudeep, Nayanthara and Jagapathi Babu (also Amitabh Bachchan in a cameo role), is touted to be south cinema's next blockbuster. On Wednesday, Farhan Akhtar, who will present the Hindi version of the film, shared a really exciting BTS video of Sye Raa Narasimha Reddy on social media and all we can say is that the action sequences will definitely give you goosebumps. The clip starts with glimpses of making of the "world of Syeraa" and move on to the crew members preparing props and costumes for the shooting. It includes glimpses of stunt directors supervising and filming the action sequences.

Announcing the collaboration with team Sye Raa Narasimha Reddy, Farhan Akhtar on Tuesday tweeted that his production house Excel Entertainment and AA Films will distribute the Hindi version of the film.

But first, check out the epic BTS video, sharing which Farhan Akhtar also announced the release date of Sye Raa Narasimha Reddy's teaser: "Here's a glimpse into the behind the scenes of #SyeRaaNarasimhaReddy. Teaser out on August 20."

Here's a glimpse into the behind the scenes of #SyeRaaNarasimhaReddy. Teaser out on 20.08.2019https://t.co/WJU3Kp6LWE

And here's the tweet, where Farhan Akhtar announced the association with Konidela Productions.

Sye Raa Narasimha Reddy, set in the 1850s, revolves around the life of freedom fighter Uyyalawada Narasimha Reddy (played by Chiranjeevi), who used guerrilla techniques to revolt against the British. Amitabh Bachchan will have a cameo in the film, where he will play a guru to Chiranjeevi's character. The film will open in theatres on October 2.