Karisma Kapoor is celebrating her 44th birthday in London 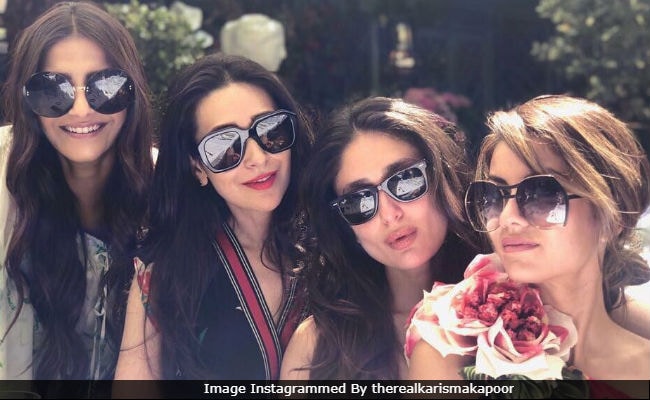 New Delhi: It's Karisma Kapoor's birthday today (June 25) and the actress is having a gala time in London with sister Kareena, brother-in-law Saif Ali Khan, Sonam Kapoor and her husband Anand Ahuja and close pal Natasha Poonawalla. Karisma turned 44 today. Last evening, Karisma, Sonam and Natasha flooded Instagram with some very nice pictures from their London holiday. (We're glad). For Kareena-Saif and Sonam-Anand, the vacation begun earlier this month while Karisma joined them about a week ago. Yes, Taimur (Kareena and Saif's son) and Samiera and Kiaan (Karisma's kids) are also there, along with Babita and Randhir Kapoor. (A mini fam-jam for the Kapoors).

Kareena, Karisma, Sonam and Natasha went for out for a brunch on Sunday and they were dressed to impress (like always).

Here's how they are chilling in London.

They were also joined by Saif, Anand and Adar Poonawalla.

Sonam also dug out a picture from her wedding album to wish Karisma. Happy, happy birthday my darling Lolo. May life offer you tons of good times, peace and all the happiness in the world.. love you tons," she wrote.

Happy happy birthday my darling Lolo. May life offer you tons of good times, peace and all the happiness in the world.. love you tons! @therealkarismakapoor @reelsandframes

Take a look at the other pictures from Kareena, Karisma and Sonam's London diaries.

With these lovelies #londondiaries #summertime

Kareena and Sonam left for London just after their film Veere Di Wedding hit the screens. Sonam also celebrated her 33rd birthday there (June 9). Her sister Rhea, cousins Arjun and Anshula also joined the group while Janhvi and Khushi reached London later.Kareena had briefly returned to India for her Miss India performance.

Karisma is the star of films like Dil Toh Pagal Hai, Hero No 1, Fida, Zubeidaa and others. She hasn't made any screen appearance after 2012's Dangerous Ishhq. She will star in a cameo in Shah Rukh Khan's December release Zero.
Comments
Kareena Kapoorkareena and karisma kapoorSonam Kapoor