Kareena Kapoor, Saif Ali Khan and their son Taimur are not done holidaying yet 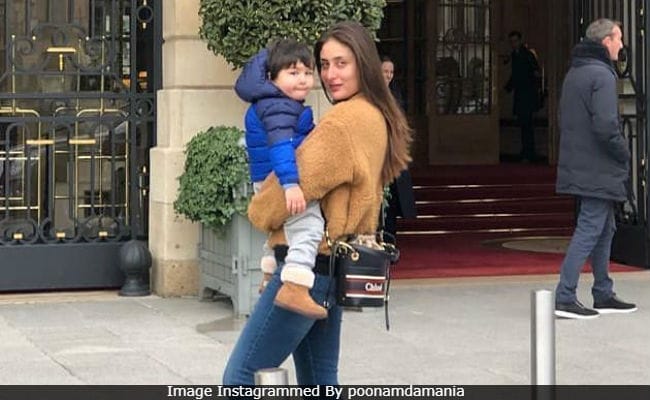 Kareena Kapoor, Saif Ali Khan and their son Taimur are not done with their holiday yet. The Pataudis, after celebrating New Year's in Switzerland, have checked in to Paris. On Thursday evening, we chanced upon a picture of Kareena and Taimur from Paris, shared by her manager Poonam Damania on Instagram. In the photo, Kareena looks chic (as always) in a brown sweater, blue denims and black boots. She holds Taimur in her arms, who looks cute as a button in a blue jacket, grey trousers and brown boots. The mother-son duo appear to have been photographed outside Hotel Ritz in Paris. "Love in Paris," read the caption.

Kareena, Saif and Taimur left Mumbai after celebrating Christmas with the Kapoors in Mumbai. Their first stop was London and later they flew to Switzerland. When in Switzerland, they holidayed with Natasha Poonawalla and her family.

Happy new year from the Pataudi's

Sledding with the little ones! Our winter wonderland

Their vacation pictures are envy-inducing, isn't it?

Kareena, Saif and Taimur's stay in Mumbai was a brief one. The couple celebrated Taimur's second birthday on December 20 in South Africa, where they also shot for a TV commercial.

Merry Christmas from the Pataudi's from the Cape of Good Hope

Before leaving for Cape Town, Kareena hosted a pre-birthday party for Taimur in Mumbai, which was attended by their family members and friends.

On the work front, Kareena Kapoor, last seen in Veere Di Wedding, has Good News and Takht in the pipeline. Meanwhile, Saif Ali Khan is filming the second season of Netflix's Sacred Games.