"I don't want to know this or I hope your father's not listening," Kareena told Sara 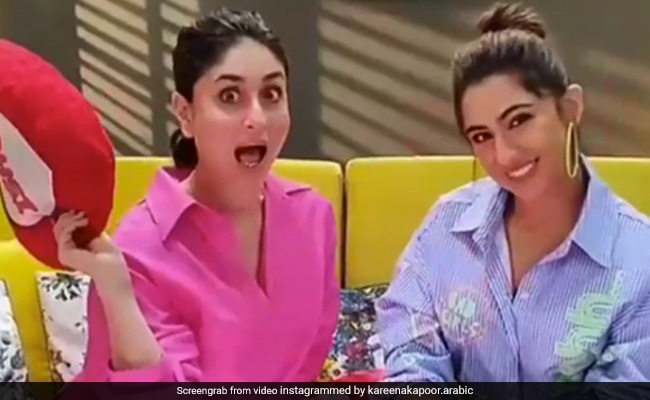 So, this happened. Sara Ali Khan recently joined Kareena Kapoor for an episode of her talk show What Women Want and it was a laugh riot! Glimpses of the fun-filled episode was shared by Maddock Films, which is producing Sara's upcoming movie Love Aaj Kal. On the show, Sara talked about her new film, losing weight and also brothers Ibrahim and Taimur. Kareena also treaded into the 'no filter' zone with Sara Ali Khan, asking her if she's ever sent "naughty texts" to someone she dated. Before Sara could answer, Kareena said: "I don't want to know this or I hope your father's not listening." LOL. Sara Ali Khan is Saif Ali Khan's daughter with his first wife Amrita Singh. Saif married Kareena in 2012, when Sara was 17.

Kareena and Sara also talked about how life changes after "losing weight" on the show. Sara, who was overweight as a teenager, opened up about battling Polycystic Ovarian Disease or (PCOD) on her debut episode of Koffee With Karan. On her show, Kareena said: "Attention from people really changes, you know... when you lose all the weight." When Sara said: "You remember actually seeing me like that." In response, Kareena told her she's become 'boring' after her transformation: "Yeah, but I miss that! Because you are not eating pizzas and you are not doing all of that. Now, you are just really boring." But Sara being Sara had the perfect reply: "But now I can maybe earn enough money to buy the pizza. How about that?"

Sara and Kareena also hilariously predicted that if another Love Aaj Kal is made 11 years from now, may be Ibrahim or Taimur would star as the hero.

Watch Sara and Kareena cook up a storm on What Women Want: