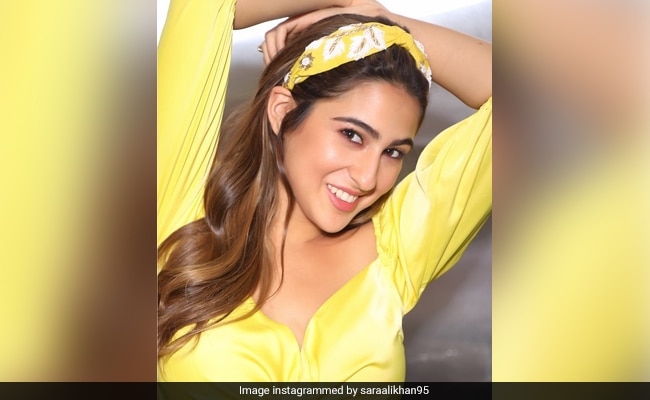 We love going through Sara Ali Khan's Instagram profile. The 24-year-old actress frequently shares posts pertaining to different facets of her life on social media. On Wednesday, Sara shared an album of her OOTD. In one of the pictures, she can be seen wearing a yellow crop top, a pair of quirky trousers and a bright yellow hairband. Besides the picture, we loved Sara's caption on the post. Sara quoted the lines from the song Gunguna Rahe Hain Bhanware from the 1969 film Aradhana, which featured her grandmother and veteran actress Sharmila Tagore. Sara captioned it: "Gunguna rahe hain bhanware... Khil rahi hai kali kali."

Sharmila Tagore, during an episode of her daughter-in-law Kareena Kapoor's talk show What Women Want stated that she "loves" the way Sara conducts herself during interviews and that she is very "proud" of her. Speaking of her grandchildren, Sharmila Tagore said, "It's really wonderful that I have two grown-up grandchildren. Sara's interviews I just love, and I am proud of her."

After the release of Sara Ali Khan's debut film Kedarnath in 2018, Sharmila Tagore texted Sara's mother Amrita Singh (Saif Ali Khan's first wife) and told her that she is very proud of her granddaughter. "Dadi is extremely proud. She is getting a lot of messages from people and she messaged mom which was a big one for me," Sara said in an interview with DNA.

Sara Ali Khan is currently busy with the promotional duties of Imtiaz Ali's Love Aaj Kal, co-staring Kartik Aaryan and Arushi Sharma. The film is slated to release on February 14. Sara also has the remake of Coolie No 1, co-starring Varun Dhawan, in the pipeline.