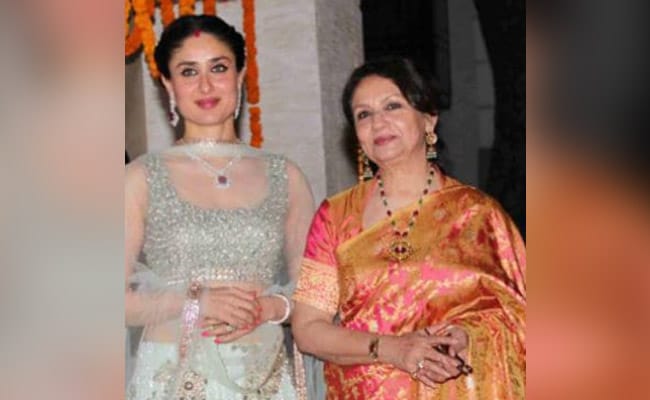 Sharmila Tagore and Kareena Kapoor occupied the top spot on the list of trends on Friday, courtesy their honest conversation on Kareena Kapoor's radio show What Women Want. Kareena kick started the second season of her show with her mother-in-law, where the latter revealed the "one thing she thinks Kareena Kapoor is good at." When the actress asked Sharmila Tagore what she really likes about her, Sharmila Tagore told her: "I like your consistency. I like the way you keep in touch because I know that if I sent you a message, you will invariably answer. Saif (Ali Khan) would, not Soha (Ali Khan). Soha most certainly won't reply. I mean, she will take time but you will reply." Aww, isn't that sweet?

Sharmila Tagore added that Kareena Kapoor ensures that she gets everything she wants whenever she visits them. "If I am coming to the house, you will ask me what I like to eat and I get what I want. That must be the Kapoor trait because you keep a wonderful table."

Continuing the conversation, the Amar Prem actress also mentioned how Kareena Kapoor stood by the family when her husband Mansoor Ali Khan Pataudi died in 2011. Mr Pataudi died of respiratory failure on 22 September in New Delhi. Talking about how Kareena supported the family like her own during the hard time, Sharmila Tagore said: "Relationship wise, you're good. I have seen you when Tiger (Mansoor Ali Khan Pataudi) was in the hospital and how you didn't draw attention to yourself. It so happened that September 21 is your birthday and Tiger passed away on the 22nd. You were there and you were just like my children and my family. I really remember that. I have seen you during various stages and you have been rather wonderful, I must say."

On the show, when Kareena asked Sharmila Tagore whom she will pick as her favourite grandchild between Taimur, Inaaya (Soha Ali Khan and Kunal Kemmu's daughter), Sara Ali Khan and Ibrahim Ali Khan (Saif's children from first wife Amrita Singh), she came with a perfect grandmother reply. Sharmila Tagore said: "I have to live. I can't possibly commit myself to that. They are all very different from each other and it's really wonderful that I have two grown-up grandchildren and two very little grandchildren. So I am enjoying both. And I think Sara's interviews, I just love and I am proud of her. And Ibrahim is the only one who looks like a Pataudi. He is kind of tall and he likes cricket." Check out their conversation: