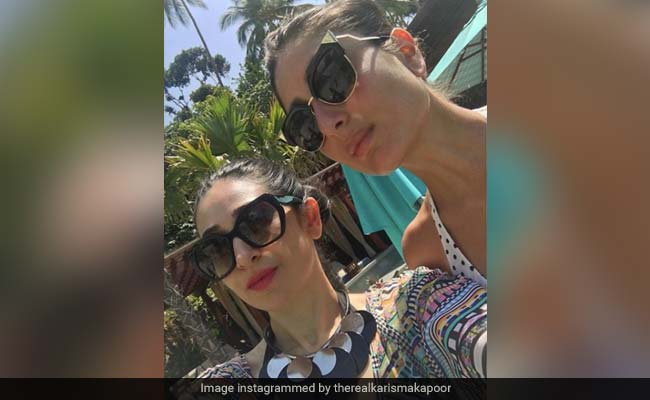 The very stylish Kapoor sisters surely know how to make every picture perfect. We are talking about Karisma Kapoor, who shared a stunning selfie along with her sister  Kareena on her Instagram profile on Tuesday, adding the hashtags #tuesdaythoughts and #sistersquad. The duo, dressed impeccably as always and wearing sunglasses, can be seen posing together for a selfie. In her post, Karisma did not reveal when or where the picture was taken but we simply love it. The Biwi No 1 actress captioned the post: "Looking towards the sun, sand and sea."

Looking towards the sun , sand and sea #tuesdaythoughts #sistersquad

Kareena Kapoor recently summed up her Monday mood in a post. "Wake up and makeup is the Monday mood I was waiting for," she wrote in the caption. Need we say more?

Kareena and Karisma Kapoor are the daughters of actors Randhir Kapoor and Babita. They are the granddaughters of renowned actor and filmmaker Raj Kapoor and the great-granddaughter of actor Prithviraj Kapoor. Their cousin Ranbir Kapoor (son of late actor Rishi Kapoor and Neetu Kapoor) is also a Bollywood actor.