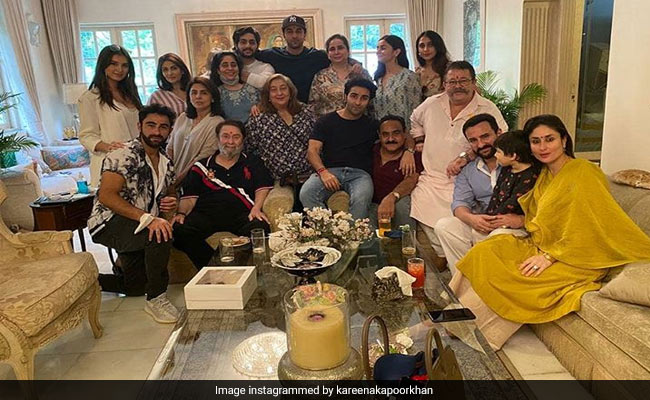 Like every year, the Kapoors gathered together to celebrate Raksha Bandhan and pictures from their get-together are sugar, spice and everything nice. Kareena Kapoor, on Monday, shared photos from the family lunch featuring herself, her husband Saif Ali Khan, their son Taimur, Kareena's father Randhir Kapoor, Neetu Kapoor, her kids Ranbir and Riddhima; Rima Jain and husband Manoj Jain and their kids Armaan and Aadar, Armaan's wife Anissa Malhotra, Randhir Kapoor's niece Nitasha Nanda and Agastya Nanda - grandson of his late sister Ritu Nanda. That's not it, Ranbir Kapoor's girlfriend Alia Bhatt, as well as Tara Sutaria, who is rumoured to be dating Aadar Jain, also joined the Kapoors for lunch. Kareena's sister Karisma Kapoor wasn't present during the family lunch.

Sharing the happy family photos and a video of Karisma Kapoor wishing her cousins on Raksha Bandhan, Kareena Kapoor wrote: "Family lunch. Miss you, Lolo" with a couple of heart emojis.

Earlier in the day, Kareena Kapoor re-shared an adorable picture of Taimur and Inaaya - originally shared by Inaaya's mom Soha Ali Khan - and accompanied it with an hilarious caption. The actress, who is known for her pout skills, wrote: "Inni wondering how Tim got that pout."

Inni wondering how Tim got that pout #Repost @sakpataudi On the ball and in my corner. #happyrakshabandhan #timandinni

Kareena Kapoor married Saif Ali Khan in 2012 and the couple welcomed Taimur in 2016. Saif was previously married to actress Amrita Singh, with whom he has daughter Sara Ali Khan and son Ibrahim Ali Khan.

On Raksha Bandhan, Sara Ali Khan, who is known for sharing her posts with ROFL captions, also posted a quirky wish for Ibrahim. She shared a clip, in which Ibrahim can be seen teasing her in a pool and wrote: "When he says he's always got my back... he doesn't mean it. Happy Rakhi to all. #brothersandsisters #partnerincrime #wortheverydime #forevermine #crazytime."