On Yug's birthday, Kajol shared a Dubsmash video of her son lip synching Matt LeBlanc's iconic dialogue "How you doin'?" 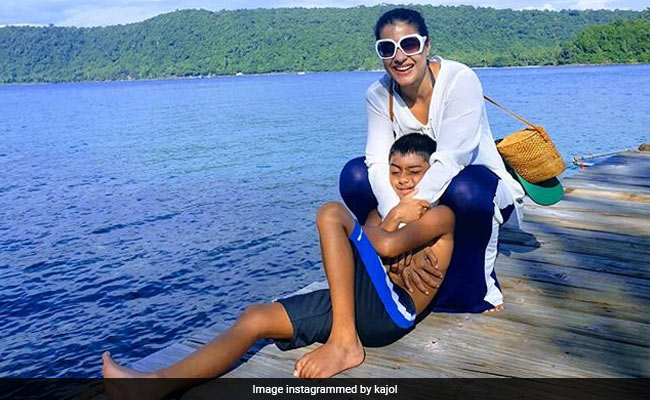 Kajol shared an adorable Dubsmash video of her son Yug pulling a leaf out of F.R.I.E.N.D.S character Joey's book to wish him on his ninth birthday, today. In the short clip, Yug can be seen lip syncing actor Matt LeBlanc's iconic dialogue - "How you doin'?" - from the popular sitcom with a hilarious expression. Kajol wrote, "Awesome at 3 and even more awesome sauce at 9! Happy birthday, Yug! (J thinks he hears me yelling even in his sleep)." Kajol and Ajay Devgn are parents to son Yug and daughter Nysa, who is currently studying in Singapore.

Check out Kajol's birthday post for her son Yug here:

Awesome at 3 and even more awesome sauce at 9! HAPPY BIRTHDAY YUG! ( j think he hears me yelling even in his sleep )

Ajay Devgn also shared a post to wish Yug on his birthday, which was a picture of the actor with his son taken inside a gurudwara. He wrote, "It's a joy watching you grow. Can never have enough."

It's a joy watching you grow. Can never have enough

Kajol and Ajay Devgn got married in 2001 and their daughter Nysa was born in 2003 while they welcomed Yug in 2010. Yug frequently features in his both his parents' Instagram posts - sometimes only taking picture credit. Through one of Ajay Devgn's social media post, we know that Yug is athletic and quite a fitness enthusiast. When the Fit India challenge was at its peak, Ajay Devgn shared a video featuring Yug performing some seriously cool stunts and exercises with ease.

On the work front, Kajol was last seen in Helicopter Eela while she has a cameo in Ajay Devgn's work-in-progress film Taanaji: The Unsung Warrior. Ajay Devgn has also signed up for Bhuj: The Pride of India, Maidaan and SS Rajamouli's RRR.