Kajol's caption doubled as a statement on the post-Diwali guilt of having eaten too many sweets. 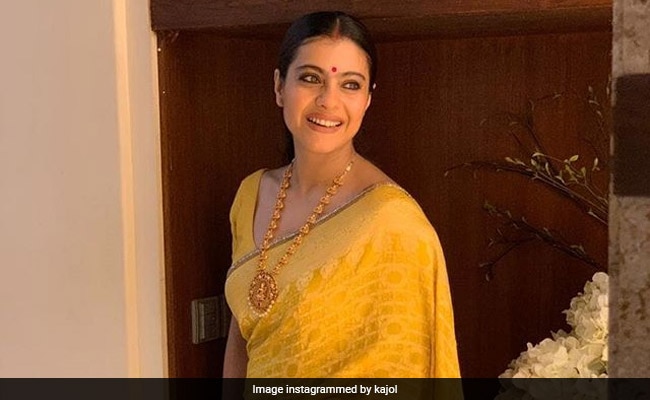 By now, Kajol has impressed a good chunk of social media users with her witticism and her latest post-Diwali entry is a worthy addition to her list of ROFL comments. She shared a boomerang video from a make-up session, in which she can be seen 'blessing' one of her team members. Her caption for the video doubled as a statement on the post-Diwali guilt of having eaten too many sweets. She wrote, "1920's Aashirwad - tumhare muh me ghee shakkar; 2020's Aashirwad - teri Diwali ki mithai tere dushman ko lage #PhooloPhalo #KhairChodo." What did we say? Kajol is one funny celebrity on Instagram.

Kajol's post-Diwali mithai blues entry is quite funny, almost as funny as that of Smriti Irani's post describing the 'struggle' of sweets versus dieting during the festive season. Earlier this week, Smriti Irani posted this on Instagram and wrote, "The struggle is real... me and my Diwali mithai."

#The struggle is Real me and my Diwali Mithai

Kajol celebrated Diwali with her family at her home in Mumbai. Her daughter Nysa was back from Singapore, where she's currently studying, while Kajol's actor husband Ajay Devgn and son Yug were also there. Ajay Devgn's sister Neelam Gandhi and her sons Aman and Danish also celebrated Diwali with the Devgns. After a family-only pooja at their home, Kajol attended the Bachchans' Diwali bash with her children.

Here are glimpses from the Devgns' Diwali celebrations:

This is us! Wishing everyone a prosperous new year.

Work-wise, Kajol was last seen in Helicopter Eela while she has a special appearance in Ajay Devgn's upcoming film Tanhaji: The Unsung Warrior. Kajol hasn't announced another project yet.