Diwali 2019: Inside Kajol, Ajay Devgn's U Me Aur Hum Celebrations With Kids Nysa And Yug 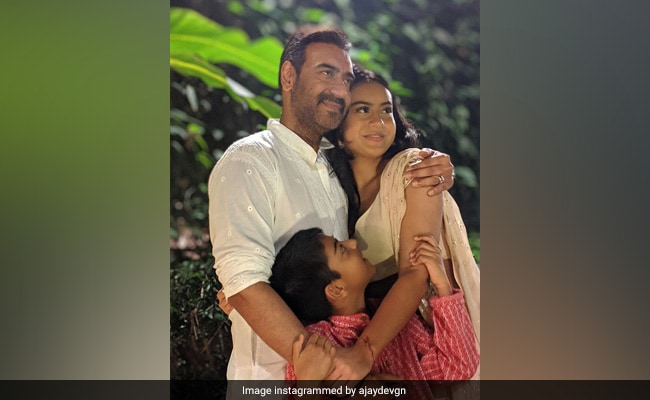 Glimpses of Kajol and Ajay Devgn's U Me Aur Hum Diwali celebrations with their family are all over the Internet. Kajol posted a picture of herself with husband Ajay Devgn along with a customary Diwali message ("Happy Diwali from us to you," she wrote) for her Instafam while Ajay Devgn uploaded a picture of himself cuddled by his children - son Yug and daughter Nysa, who is studying in Singapore and is currently back home for Diwali. "This is us! Wishing everyone a prosperous new year," he wrote. Ajay Devgn's sister Neelam Gandhi also joined them for Diwali along with her sons Aman and Danish.

This is us! Wishing everyone a prosperous new year.

After the Diwali puja at her home, Kajol attended the Bachchans' Diwali party - one of the two big Diwali celebrations held in Mumbai on Sunday - along with her children Nysa and Yug. Apart from the Bachchans, actor Anil Kapoor also hosted a grand party at his home in Juhu.

On the work front, Ajay Devgn is currently looking forward to the release of Tanhaji: The Unsung Warrior, in which he plays the title role while his Omkara co-star Saif Ali Khan plays his nemesis. Kajol also has a special appearance in the movie, which is directed by Om Raut. Tanhaji: The Unsung Warrior will open in cinemas on January 10 next year.

(Except for the headline, this story has not been edited by NDTV staff and is published from a syndicated feed.)
Comments
diwali 2019ajay devgnkajol