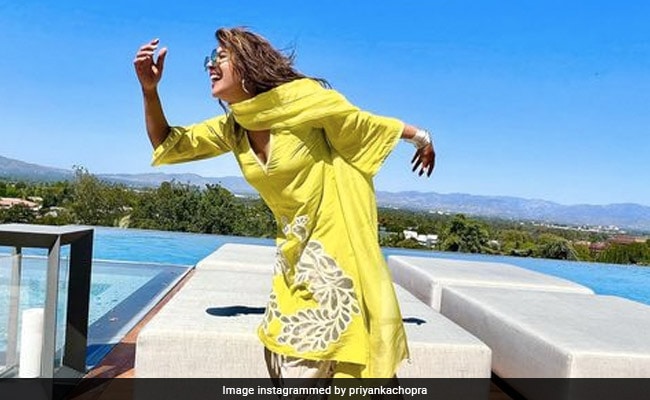 Priyanka Chopra shared pictures from her Los Angeles home and stunning can't even begin to describe it. On Thursday night, she posted a few sun-kissed pictures. In the pictures, the actress can be seen dressed in a yellow kurta and palazzo pants. She captioned the post: "When the sun hits just right." The pictures got a whole lot of love from fans. "Love this color combo! And you look so pretty! Glowing in the sun," wrote an Instagram user. "Stunning," added another. "The sun loves you," added another. Check out Priyanka Chopra's post here:

Priyanka loves to share posts from her LA diaries. A few days ago, she shared pictures of herself and husband Nick Jonas and wrote: "Game Day #perfectsunday #happyVallis."

Some stunning shots from Priyanka and Nick's Holi celebrations in LA. "Do me a favor.. let's play Holi. Sorry. Had to! Holi hai," she wrote.

In terms of work, Priyanka Chopra's next project Citadel, a multi-series with productions from India, Italy and Mexico and it also stars Richard Madden and it will be directed by the Russo Brothers. Citadel is Priyanka Chopra's second project with Amazon Prime Video after announcing the Sangeet Project, a sangeet-themed dance reality show, which she will host with Nick Jonas.

Last year, Priyanka Chopra was seen in Netflix's The White Tiger, based on Aravind Adiga's Booker Prize winning novel. She was last seen in Matrix 4.