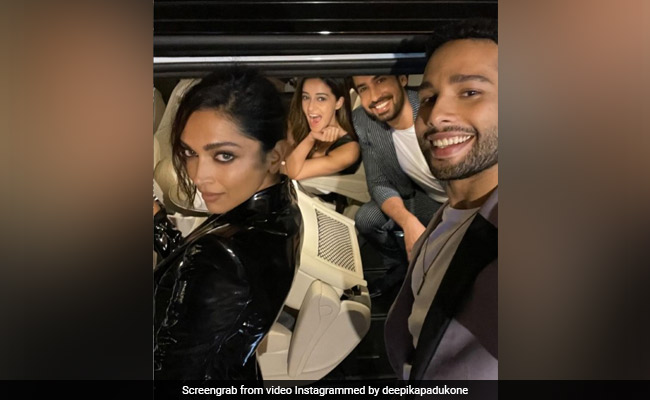 A still from the video. (courtesy: deepikapadukone)

Deepika Padukone, Ananya Panday, Siddhant Chaturvedi and Dhairya Karwa can't keep calm. On Wednesday, Deepika shared a video on her Instagram profile, in which she, along with her Gehriayaan co-stars Ananya Panday, Siddhant Chaturvedi and Dhairya Karwa can be seen grooving to the new track Beqaboo from their upcoming film. In the video, the quartet can be seen humming the song as they pose for the camera. Deepika Padukone captioned the post: "That's how we roll."

Check out the video posted by Deepika Padukone here:

The track Beqaaboo released on Wednesday. It has been composed by OAFF and Savera and it has been sung by Savera and Shalmali Kholgade. It has been written by Kausar Munir. "I'd be lying if I said this isn't my most favourite song from the album," Deepika wrote for the song.

Deepika Padukone described the project as "magical" in one of her Instagram posts. She wrote: "Yes...It has been a bit of a wait.But as the saying goes...Sometimes, the longer you wait for something, the more you appreciate it when it finally arrives! Hopefully, the same holds true here. I took the opportunity to be a part of something that I believe was truly magical. And with love in my heart and utmost gratitude, I cannot wait to share our labour of love with all of you."

Directed by Shakun Batra and produced by Karan Johar's Dharma Production, Gehraiyaan's filming began in 2020. The stars were frequently spotted traveling to and from Alibaug for the film's shoot - they were also in Goa for the film's shooting schedule. The film has been shot in Goa, Mumbai and Alibaug. It will release on Amazon Prime Video on February 11. It will clash with Rajkummar Rao and Bhumi Pednekar's Badhaai Do, which will have a theatrical release.