Janhvi Kapoor Asks If She Can Call Herself A "Painter." The Internet's Verdict

Keeping up with Janhvi Kapoor 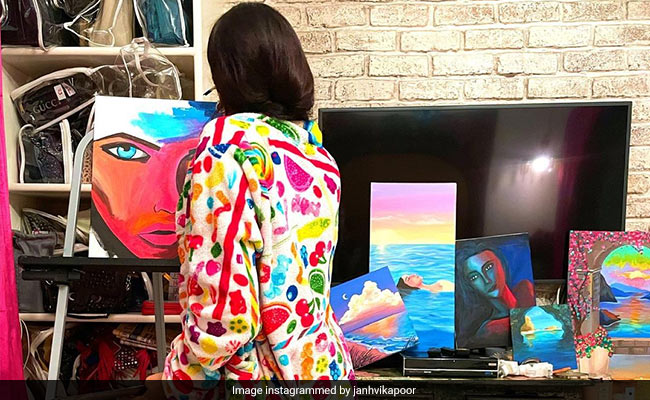 What's keeping Janhvi Kapoor busy these days, you ask? Well, the actress has been painting and she shared a photograph of her latest creations in her Instagram entry on Sunday. In one of the pictures, she can be seen painting. The second shot shared by her features some of her paintings. Along with the post, Janhvi asked her Instafam: "Can I call myself a painter yet?" Seems like Janhvi's Instafam was largely impressed with her painting skills. Dia Mirza commented: "Like Mother like daughter. Keep painting." Janhvi's Roohi co-star Varun Sharma wrote: "Woohh! Which one are you gifting me?" A fan on Instagram wrote: "Wow." Another fan added, "Definitely a painter." Other fans simply flooded her post with heart emojis.

When Janhvi Kapoor  is not busy shooting for films, she can either be seen painting or dancing. The actress has actively been sharing dance videos, in which she can be seen grooving to popular dance numbers.

On some days she works out with fellow actors. Remember her workout video with Sara Ali Khan?

In terms of work, Janhvi Kapoor was last seen in the horror comedy Roohi, with Rajkummar Rao and Varun Sharma. The actress, who made her Bollywood debut with the 2018 film Dhadak, opposite Ishaan Khatter, has featured in films like Netflix's Ghost Stories and Gunjan Saxena: The Kargil Girl. Her line-up of film includes comedy Dostana 2, co-starring Kartik Aaryan. She will also be seen in Good Luck Jerry.