Janhvi Kapoor, who went cycling with her face mask on, did not pose for pictures, like she usually does 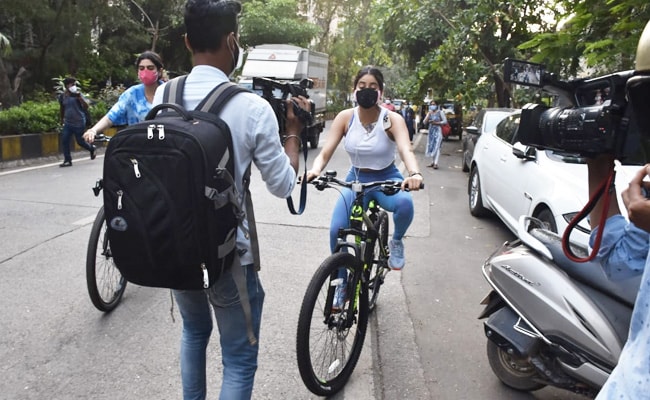 Janhvi Kapoor, who went on a brief cycling tour in Lokhandwala on Thursday, was spotted schooling the paparazzi for not maintaining social distance outside her apartment premises. In a video, the 24-year-old actress can be seen halting on her way back to her apartment to maintain safe distance from the sea of paparazzi as they followed her for pictures. Janhvi, who was visibly displeased, can then be heard requesting the shutterbugs to make way for her and her sister Khushi, politely. "Aise please maat karo, raasta please de do (Please don't do this... please clear the way)." Janhvi and Khushi were also accompanied by a friend on their cycling tour.

Janhvi Kapoor, who went cycling with her face mask on, did not pose for pictures, like she usually does. After requesting the paparazzi to move away, she got off the cycle and quickly made her way inside through the gates.

Mumbai is currently under lockdown-like restrictions till June 1. Positivity rate in Mumbai dropped to 4.84 per cent, the lowest in over two months as the city logged 1,425 new cases. Mumbai has 73 active containment zones in slums and chawls while the number of sealed buildings is at 276. India reported 2.59 lakh new COVID-19 cases, taking its tally to 2.6 crore.

Just last month, actor Varun Dhawan requested the paparazzi to maintain a safe distance from him and his wife Natasha Dalal at the Mumbai airport - they flew back from Arunachal Pradesh, where Varun was shooting for his film Bhediya. The actor was even spotted asking a photographer to put his mask on properly.