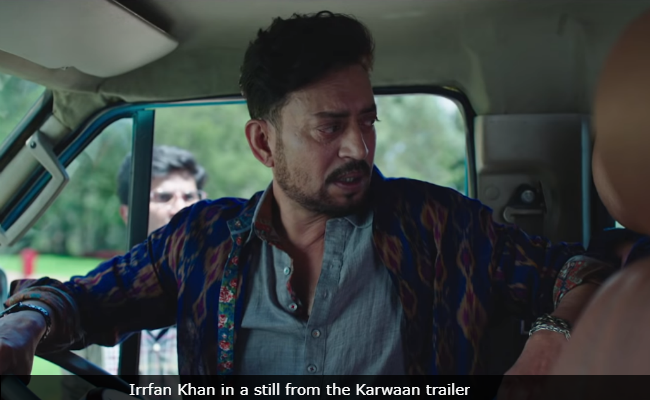 Irrfan Khan in a still from Karwaan. (Image courtesy:

Actress Mithila Palkar feels that her Karwaan co-star Irrfan Khan, who is currently being treated for neuroendocrine tumour in London, is a fighter, reports news agency PTI. During a recent media interaction, Mithila said that the film's promotions feel incomplete without Irrfan Khan. She told PTI: "These promotions are completely incomplete without him. He brings the most vibrant and refreshing flavour of him in Karwaan." The 25-year-old actress also wished Irrfan a speedy recovery. "It was extremely heart-breaking to hear this (Irrfan's illness) but all our love and prayers are with him. He is a fighter. Hope we see him very soon," PTI quoted her as saying.

Meanwhile, Irrfan Khan, who is unable to attend the film's promotional activities, has been equally adept at promoting Karwaan on social media. During a recent interview, the film's producer Priti Rathi Gupta told news agency PTI, "Irrfan is very much actively supporting and promoting the film. I know he is going through a journey and we are missing him around, we are missing his physical presence. But in the digital era, we all can be involved in things on social media."

Emotions. Adventures. Chaos. Experience all of these as you get on board! #KarwaanTrailerOutNowhttps://t.co/WiEEAaIo5f@MrAkvarious@dulQuer@mipalkar@RonnieScrewvala@rsvpmovies@IshkaFilms@PritiRathiGupta@TSeries

Karwaan is a comedy drama that traces the journey of three strangers. Directed by Akarsh Khurana, the film will mark the Bollywood debut of Dulquer Salmaan and it will hit the screens on August 3.

Mithila Palkar is best-known for her performances in web-series such as Girl in The City and Little Things. She made her Bollywood debut with the 2015 film Katti Batti, which featured Kangana Ranaut and Imran Khan.