Ira Khan Tried To Workout With Gymnastic Rings. So, How Did She Do? 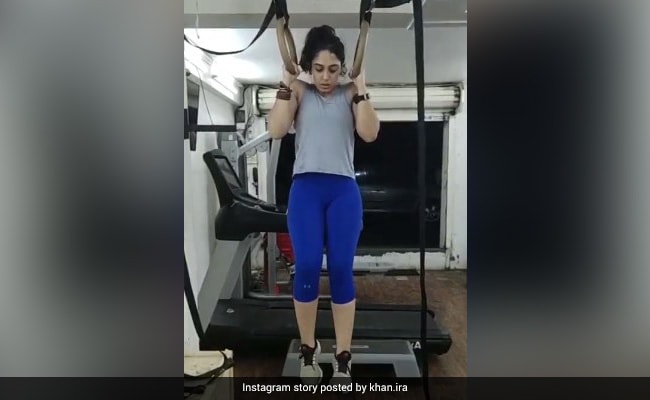 Ira Khan in a still from the video. (courtesy: khan.ira )

Ira Khan took her fitness game to new heights with gymnastic rings and she shared her experience by posting videos on her Instagram profile on Thursday. Ira wrote in the caption: "This is me in a gym. Squeals and all. Sorry about the super loud standing fans. The only time I'll skin a cat." In the comments section, Ira's friend and actor Gulshan Devaiah wrote: "Looking trim yo! Burning away all those Maggie calories." Ira Khan frequently shares videos from her workout sessions on her Instagram profile. Once, her father and Bollywood actor Aamir Khan crashed her workout video.

Take a look at Ira's video:

This is me in a gym. Squeals and all. Sorry about the super loud standing fans. @nupur_shikhare the only time I'll 'skin a cat' #workout #rings #squeal #whoops

Last month, Ira was working out with fitness trainer David Poznic virtually, when Aamir Khan crashed the video. David, who trained Aamir Khan for Dhoom 3 as well as PK, asked the actor if he wanted to join the session, to which Aamir replied that he just came to say hi. Ira added, "Next time, I will force him."

Join us for a fun home workout with Ira Khan during lockdown! Back when I was training Aamir for Dhoom 3 and PK, Ira used to hang out with us a lot, but would basically run away when I tried to get her to work out! Many years have passed, and now we're diving into weekly workouts with plenty of pushups, squat variations, and some fun with feet in the air. This session also included a fun surprise hello from Aamir. But now the tables have turned - Ira was rocking the workout and Aamir just popped in to say hi! You can follow along with this workout, and be sure to stay tuned for more live workouts coming soon!