"My buddy for the day," wrote Ira 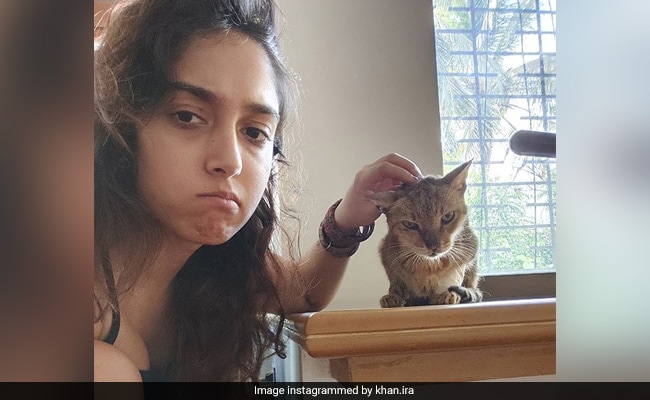 Aamir Khan's daughter Ira Khan, who is a pet lover, shared pictures of herself and her new buddy - a cat- on Wednesday and we bet it will make your day. In her post, Ira called the cat her "buddy for the day" and wrote: "My buddy for the day... #catlady #kubla #cat #grumpycat #mykindoflove." In one of the pictures, Ira khan can be seen kissing the pet that can be seen sitting on what appears to be a table, while in other photos, she can be seen making grumpy faces with the cat. Here's the post we are talking about:

My buddy for the day . . . #catlady #kubla #cat #grumpycat #mykindoflove

Ira Khan's Instagram entries prove that she loves spending time with pets. In April, she posted pictures of herself cuddling a dog and wrote: "Miss them cuddles."

Before that, Ira shared pictures of herself playing with a clowder of cats and captioned her post like this: "Where I wish I was spending this quarantine."

Ira is the younger of Aamir Khan's two children with his first wife Reena Dutta. The actor is now married to filmmaker Kiran Rao, with whom he has a son named Azad. Ira also sometimes shares pictures of herself and Azad on social media.

Ira Khan made her directorial debut with a theatrical adaptation of Euripides' Medea, a Greek tragedy originally written by Euripides. Medea featured actress Hazel Keech in the lead role. The cast of Ira's play also included her brother Junaid and actors Varun Patel, Sabreen Baker and Divyesh Vijayaka. It premiered in different cities across India in December last year.