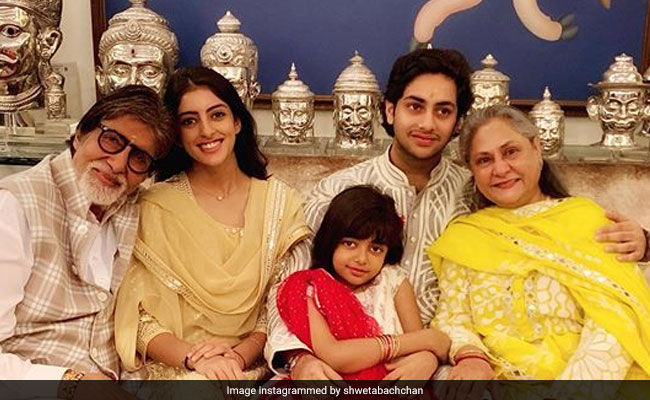 Finally! Pictures of the Bachchans celebrating Raksha Bandhan arrived and we can't keep calm. From Amitabh-Jaya Bachchan and Abhishek Bachchan-Shweta Bachchan Nanda to Navya-Agastya Nanda and Aaradhya Bachchan, the pictures have almost all of the members of one of the most loved-up Bollywood families. The big happy family pictures also include Naina Bachchan, daughter of Amitabh Bachchan's brother Ajitabh. However, we missed Aishwarya Rai Bachchan in the Bachchans fam-jam photos. Sharing the photos from the celebrations on her Instagram profile, Shweta Bachchan gave us several glimpses of brother-sister bonding. In her first post, Shweta Bachchan shared an adorable picture of Big B along with Jaya Bachchan, Aaradhya, Navya Naveli Nanda and her brother Agastya.

In a separate post, Shweta Bachchan shared a picture of herself posing with her brother Abhishek and wrote: "Cha Ching." Take a look:

Her third post is a perfect family picture, which features Agastya, Naina, Shweta, Navya, Aaradhya and Abhishek. All of them can be seen smiling with all their hearts in the group photo. Cute little Aaradhya in her white dress and red dupatta is looking beyond adorable. Going by the picture, it wouldn't be wrong to say that the Bachchans carry out the traditional look like no one else. Check out the photo here:

On the occasion, Abhishek Bachchan also shared a picture with Shweta Bachchan and Naina Bachchan and wrote: "They have been by my side through it all (also the other two not pictured here) and still, they stand in support and with love."

They have been by my side through it all ( also the other 2 not pictured here), and still, they stand in support and with love. Happy Rakhi @shwetabachchan @nainabachchan, Namrata and Nilima. #brothersandsisters #rakshabandhan

Earlier in the day, Amitabh Bachchan also shared a couple of throwback pictures of himself along with his actress wife Jaya and children Abhishek Bachchan and Shweta Bachchan Nanda. Sharing blasts from the past on Twitter, Big B wrote: "The love of the sister, the protection of the brother...The strong bond, everlasting and sincere."

T 3258 - RakshaBandhan .. the love of the sister .. the protection of the brother .. the strong bond everlasting and sincere ..
pic.twitter.com/7vpZqrrdX1