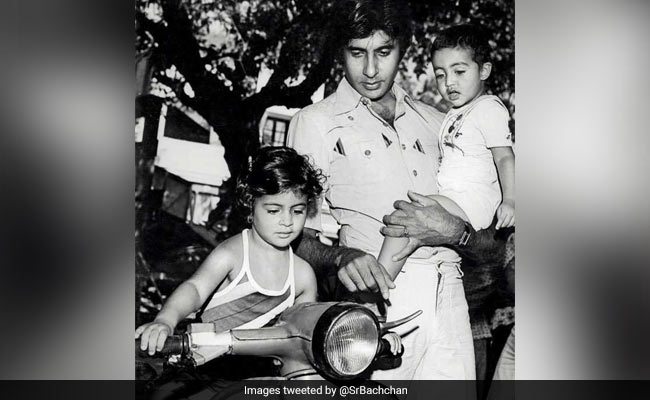 The Internet is brimming with love today and why shouldn't it; after all, it's not every day that we celebrate Raksha Bandhan, right? What's interesting is that most Bollywood stars posted loved-up posts on their social media profiles and Amitabh Bachchan is not an exception. On Thursday, the 76-year-old actor struck gold in his photo archive and shared priceless throwback photographs of himself along with his children - Abhishek Bachchan and Shweta Bachchan Nanda. He also shared another throwback picture along with his actress-wife and their kids. The quartet can be seen happily posing together in the photograph.

Sharing the memories on his Twitter profile, Big B wrote: "The love of the sister, the protection of the brother...The strong bond, everlasting and sincere." This is the post we are talking about:

T 3258 - RakshaBandhan .. the love of the sister .. the protection of the brother .. the strong bond everlasting and sincere .
pic.twitter.com/7vpZqrrdX1

Mr Bachchan has a treasure trove of throwback pictures. The actor frequently delights his fans with blast from the past photos. A few months ago, the actor shared a picture which happened to be from Shweta Bachchan Nanda's childhood days. "Ek din aisi thi aur fir pata nahi chala... aisi ho gayi," read the caption on BigB's post.

Amitabh Bachchan married actress Jaya Bachchan on June 1973 and they have featured together in films such as Sholay, Kabhie Khushi and Kabhi Gham and Silsila among others.