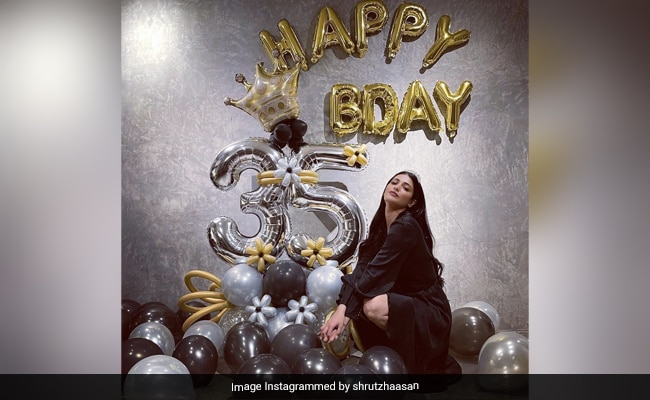 Shruti Haasan, who celebrates her 35th birthday today, shared a picture from her 35th birthday celebrations and stunning can't even begin to describe it. In the happy picture, the birthday girl can be seen posing with some balloons. For her special day, Shruti picked a black outfit. The actress' swag is just off the charts in the picture as she pouts and poses for the photograph. She accessorised her look with a tiara. Along with the picture, Shruti added a thank you note for her fans and wrote: "Filled with gratitude and joy! This has been the best phase of my life and I'm thankful for my lessons and the journey ...I've grown and changed in ways that have shaped my vision of the future I want for myself filled with light and creativity - I want to take a second to say a giant thank you to my virtual family for making my birthday so special. Thank you for all your wishes I feel so loved."

Meanwhile, Shruti's  sister Akshara Haasan also posted a birthday greeting and she wrote: "Happiest birthday to my Akka. A sister who is a champ in her own right and always has my back like a bro pro."

Shruti Haasan, daughter of veteran actor Kamal Haasan and Sarika, has starred in several Tamil as well as Bollywood films. She stepped into Bollywood with the 2009 film Luck, co-starring Imran Khan. The actress has also been a part of films such as Welcome Back, Ramaiya Vastavaiya, Dil Toh Bachcha Hai Ji and D-Day among other.