Guess The Celeb "Monkeying" Around In This Nineties' Pic

Like always, Shruti's blast from the past turned out to be a super-hit with her Instafam, who showered the photo with a whole lot of love. 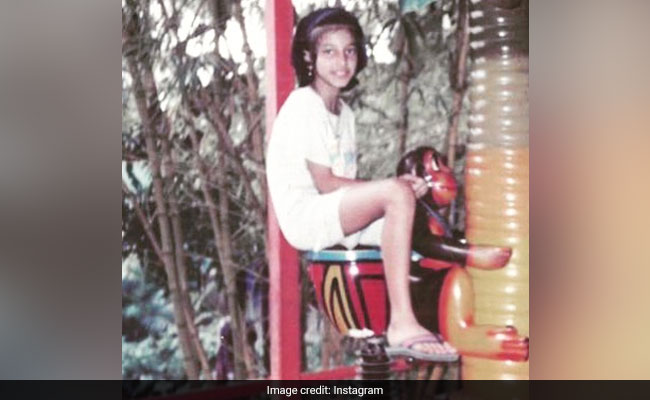 Shruti Haasan is the undisputed queen of quirky captions when it comes to childhood pictures and her Throwback Thursday treat was just one more addition to the list. Shruti Haasan took a trip down memory lane, all the way to her childhood, and fished out a photo from the Nineties. "Monkey me," Shruti Haasan captioned the photo and dated it to be from 1993. Shruti Haasan, born in January 1986, must have been seven years old in the throwback memory. Like always, Shruti's blast from the past turned out to be a super-hit with her Instafam, who showered the photo with a whole lot of love.

Shruti Haasan's Instagram is filled with such throwback gems from her treasury. Shruti Haasan captioned one of her school photos like this once: "Laughing since the 90s watching people fall into the traps I set for them."

In another post, Shruti Haasan also described herself as a "weirdo" and she's been that way since the Nineties: "Wearing all black. Random tattoo on face. Being a weirdo since 1995."

Of the throwback photos shared in the recent past, Shruti Haasan trended a great deal for this photo featuring legendary singer Asha Bhosle.

#Repost @shrutzlovez with @get_repost ・・・ Just a picture of @shrutzhaasan singing in her uniform I LOVE THIS PICTURE ???? I even remember this day and being so so nervous to sing in front of the legend herself ! Such a beautiful memory - Thankyou so much for sharing ????????❤️ @asha.bhosle

Shruti Haasan is the eldest of Kamal Haasan's two daughters. Her sister Akshara is also an actress. Shruti Haasan was last seen in Tigmanshu Dhulia's movie Yaara, ahead of which she featured alongside an ensemble cast in the short film Devi. Shruti has also starred in Bollywood films such as Rocky Handsome, Welcome Back and Ramaiya Vastavaiya. She also voiced the character of Elsa in the Tamil version of Disney's Frozen 2. Her upcoming projects include films such as Putham Pudhu Kaalai, Krack and Vakeel Saab.

Priyanka Chopra In We Can Be Heroes First Look Means Business. Hello There, Pedro Pascal