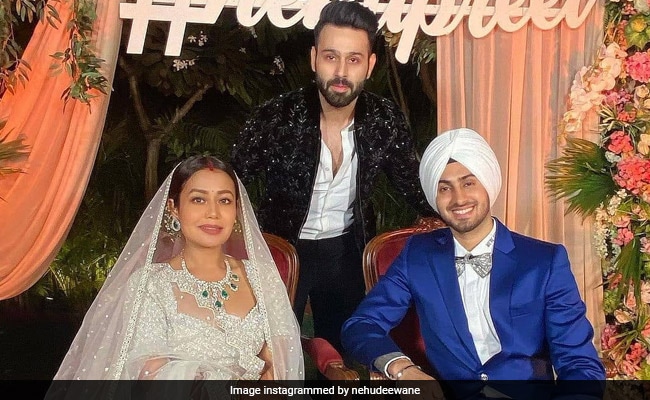 The final leg of Neha Kakkar and Rohanpreet Singh's wedding festivities came to an end with their wedding reception that took place in Chandigarh, Punjab on Monday night. Singers Neha Kakkar and Rohanpreet Singh, after getting married in a traditional Anand Karaj ceremony at a Gurudwara in New Delhi, continued the wedding festivities with a grand ceremony on Saturday night. Coming back to the reception, the couple looked stunning in traditional outfits. Neha opted for a silver-white lehenga with diamond-emerald jewelery, while Rohanpreet chose a blue suit-piece. The pictures from their reception are going insanely viral on social media.

For their wedding, the couple wore colour-coordinated outfits by Falguni and Shane Peacock. Sharing a picture along with her husband Rohanpreet, Neha Kakkar wrote: "Rohu and I wore Falguni Shane Peacock for our night wedding. Must say they're the best! Loved wearing their creation."

Neha Kakkar is best-known for singing tracks such as Dilbar redux, Manali Trance, Kala Chashma, Aankh Mare redux from Simmba, among many others. Other than Indian IdolSa Re Ga Ma Pa L'il Champs.