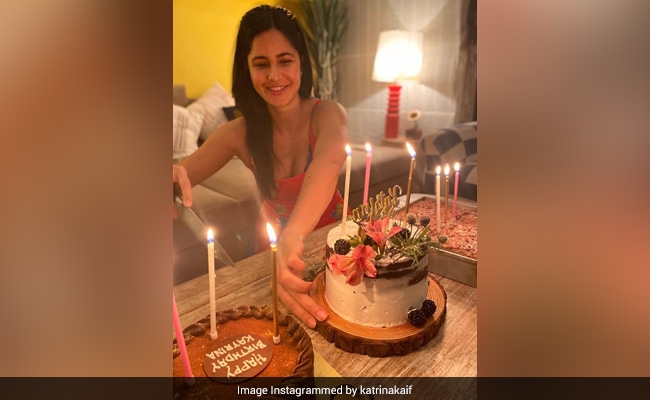 Katrina Kaif, who turns 37 today, chose to celebrate her birthday at her Mumbai house, where she lives with her sister Isabelle. The actress gave her Instafam a glimpse of her birthday festivities by sharing a picture on her Instagram profile. In the picture, the birthday girl can be seen sitting pretty and smiling with all her heart as she cuts her birthday cakes (there were 2). In her caption, the actress thanked all her fans, friends and well-wishers and wrote: "Thank you for all the birthday wishes." She accompanied her post with a cake, a house and a heart emoticon.

thank u for all the birthday wishes

Katrina Kaif's sister Isabelle, who stays with the actress in her Mumbai home, posted this adorable picture and she wrote: "Happiest of birthday's sister dearest."

Sharing a stunning a picture of herself with Katrina on her Instagram profile, Kareena Kapoor wrote: "Happy birthday Kat. I wish you happiness and love forever. May you continue to shine."

Happy birthday Kat... I wish you happiness and love forever... may you continue to shine... @katrinakaif

In terms of work, Katrina Kaif was last seen in Ali Abbas Zafar's 2018 film Bharat, co-starring Salman Khan and Disha Patani. She will next be seen in Rohit Shetty's cop drama Sooryavanshi, alongside Akshay Kumar.