Inside Kajol's Weekend Lunch With Her 'Musketeer' Friends 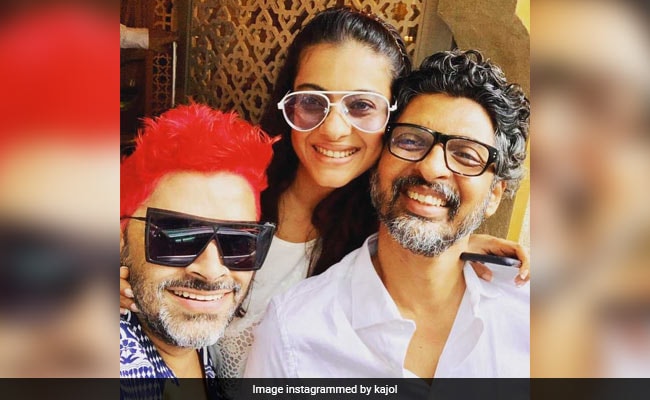 Kajol made the best use of her weekend by having lunch with her friends or should we say "musketeers" ( as she aptly described in her caption). The 44-year-old actress posted a picture from her day out, on her Instagram profile and she captioned it: "Three Musketeers hard at lunch today." Besides Kajol, the photograph also featured producer Ryan Stephen and filmmaker Niranjan Iyengar. In the picture, Kajol can be seen dressed in a crisp white shirt and can be seen wearing a pair of white over-sized glasses. The picture received lots of love from the actress' fans and about 90,000 likes within a few hours on Instagram.

Earlier this month, Kajol shared a series of posts from her vacation where she was accompanied by her actor-husband Ajay Devgn, and their kids Nysa and Yug. Though Kajol did not reveal the destination in her posts, the Devgns' vacation pictures were sugar, spice an d everything nice. Check out the pictures here:

Thinking about all this glory surrounding us ..... somewhere in the mountains.

On the work front, Kajol was last seen in the 2018 film Helicopter Eela. The film which was directed by Pradeep Sarkar also featured National Award winning actor Riddhi Sen and Neha Dhupia in pivotal roles.

As of now, Kajol has not announced her forthcoming projects. However, the actress will reportedly be seen sharing screen space with her husband Ajay Devgn in his forthcoming film Taanaji: The Unsung Warrior, a period drama slated to release next year.