In Which Kajol, Ajay Devgn, Nysa And Yug Go On A Road Trip. See Pic 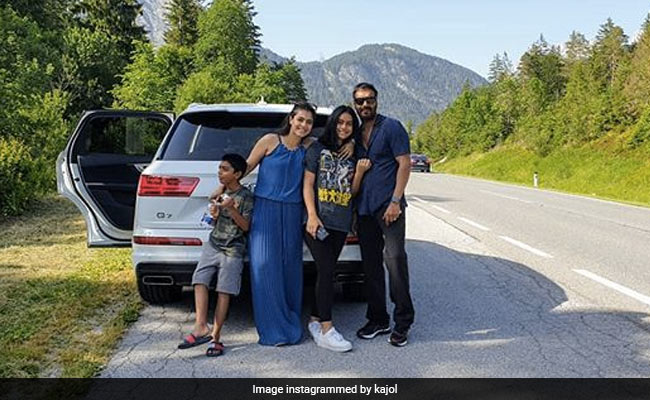 Kajol is on a road trip with her three favourite allies - husband Ajay Devgn, daughter Nysa and son Yug. The 44-year-old actress posted a picture on Instagram of the family and their car against a landscape of blue sky, hills and greenery. Kajol didn't reveal their destination but it looks gorgeous. "Grumbles, rumbles and potato chips... road trip. Finally!" she captioned the post. We have to say Kajol is one glamorous road tripper, wearing a blue maxidress that looks both stylish and comfy. Unsurprisingly, the post has been getting a lot of love with lots of comments wishing the family happy holidays.

We are looking forward to more pictures from Kajol and Ajay Devgn's road trip; Yug, who is the photographer of the family and gets credit for many of the pictures posted on his parents' accounts, is sure to take a few.

The Devgns have had a difficult month or so after losing Ajay's father Veeru Devgan. The veteran action director died on May 27 at the age of 85. Kajol later posted a tribute to her father-in-law with this post on Instagram caption "In happier times":

In happier times ... . He won the award for a lifetime of achievement on this day but it took a lifetime to prove. So many people mourn the life of the man but that was a life well lived... RIP with love.

Kajol, the daughter of actress Tanuja and producer Shomu Mukherjee, made her debut in 1992's Bekhudi and starred in hits such as Baazigar, Gupt, Dilwale Dulhania Le Jayenge, Kuch Kuch Hota Hai and Kabhi Khushi Kabhie Gham. She was last seen in Helicopter Eela and has a role in her husband's upcoming film Taanaji: The Unsung Warrior.