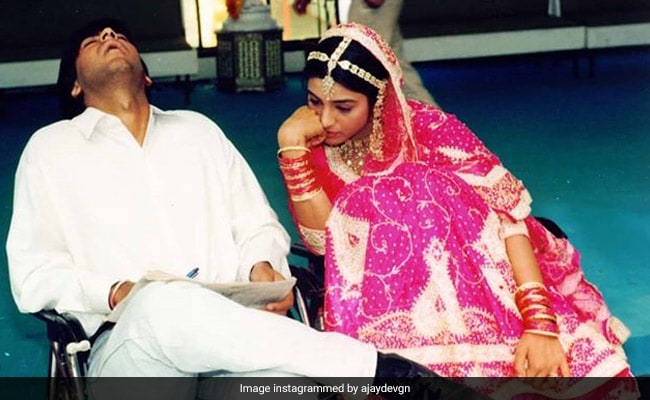 Ajay Devgn and Tabu recently featured in... no, we aren't talking about their new film De De Pyaar De here. Rewind. Ajay Devgn and Tabu recently featured in a priceless throwback photo, courtesy Mr Devgn. Looks like the 50-year-old took a trip down the memory lane and fished out a piece of really purana photo from what appears to be the sets of 1994 film Vijaypath, also featuring his co-star Tabu. The photo surely is a throwback delight but its Ajay Devgn's caption that takes the cake - "Still haven't figured if the reason to fall asleep was the puzzle or Tabu." LOL. In the photo, which appears to be a behind-the-scenes shot from the climax of the movie, Ajay Devgn can be seen fast asleep while holding a pen and a newspaper in his hands.

Tabu, dressed like a bride in bright pink, appears to stare hard at the crossword puzzle. That clearly must have been some puzzle!

Ajay Devgn is a fan of crossword puzzles though and we know it because:

When I actually tried to solve a paper puzzle and was looking at human kind. #throwback

And he's also a fan of throwback memories. Have you seen his "Throwback to when I thought specs were cool" and "Throwback to good old days with long locks" photos?

Throwback to when I thought specs were cool...

Vijaypath was Ajay Devgn and Tabu's first film together and they also co-starred in movies such as Thakshak and Haqeeqat in the Nineties. In the recent past, they worked together in Drishyam, Golmaal Again and just recently in De De Pyaar De.