Taapsee Pannu was trolled for her tweet on man killing his 19-year-old girlfriend, in which she alluded to Sandeep Vanga's 'slap' interview. 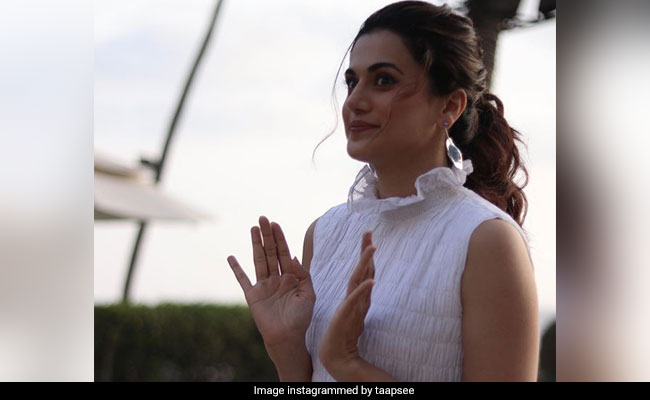 Twitter is least impressed with actress Taapsee Pannu's tweet on a jealous boyfriend killing his 19-year-old girlfriend, in which she alluded to Kabir Singh director Sandeep Reddy Vanga's controversial 'slap' interview with Anupama Chopra. On Monday, the 31-year-old actress shared a story, the headline of which read, "Man Smashes 19-Year-Old Girlfriend's Head Over Her 'Character'" and wrote, "Or maybe let's just say they were madly in love with each other and this 'act' was to validate his true love for her." Taapsee's tweet appears to be a direct attack on Sandeep Reddy Vanga's controversial statement in which he said, 'there's no emotion if you can't slap your woman' after his new film Kabir Singh and the eponymous character were slammed as 'misogynistic.'

Or maybe let's just say they were madly in love with each other n this 'act' was to validate his TRUE love for her. https://t.co/BGmhA7XHyM

However, Taapsee's tweet did not go down well with the Internet, who slammed Taapsee for being 'insensitive' in her critique of the filmmaker. The actress defended herself in a separate tweet, in which she wrote, "Statutory warning: people with no sense of sarcasm kindly ignore me and my tweet. Thank you, it was nice not knowing you." But Twitter was unforgiving. One Twitter user said, "Sarcasm on brutally killed dead bodies was never a sensibility in any culture." Another wrote, "It's not sarcasm... it shows that you are a highly insensitive person... and you don't have common sense but yes, common sense is not common."

Statutory warning: people with no sense of sarcasm kindly ignore me n my tweet. Thank you , it was nice not knowing you https://t.co/OhIeOd6ZYf

And here's what Twitter's saying about it:

Consider hiring a PR manager who can help you to understand how to behave in public domain and sarcasm on the brutally killed dead bodies was never a sensibility in any culture.

Its not sarcasm ...it shows you are a highly insenstive person . .and u dont hv common sense but yess common sense is not common...

Funny isnt it, that you find humour is someone's death.

It was not sarcasm, it was insensitivity and stupidity.

I really like you and your work but finding sarcasm in this tragedy??? Really? You can do much better.

Or perhaps the 'kiIIing' of an innocent 19 year old girl is not an appropriate source of Sarcasm. It certainly isn't.

Taapsee Pannu was seen in Badla and Game Over earlier this year while she's awaiting the release of Saand Ki Aankh, co-starring Bhumi Pednekar.