"Happy Holi to all my Instafam from all of us," wrote Shilpa Shetty 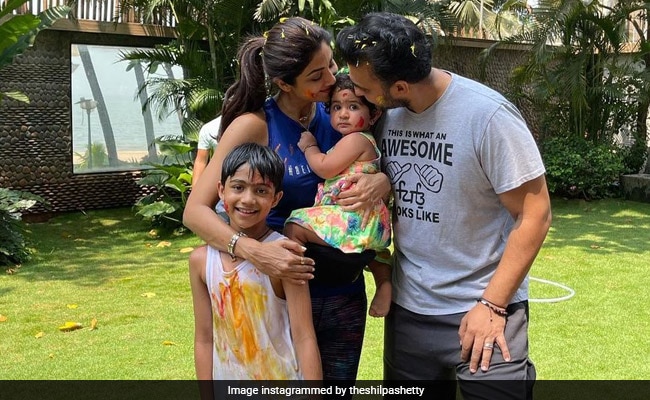 Shilpa Shetty blessed our Instagram feed with sheer cuteness on Holi. The actress shared pictures from her Holi celebrations with family. The pictures feature Shilpa with husband Raj Kundra, kids Viaan Raj Kundra and daughter Samisha, who looks cute as a button. Baby Samisha looks super cute, dressed in a colourful outfit. Sharing the happy pictures on social media, Shilpa Shetty captioned the post: "Happpppyyyyyy Holiiiiii to all my instafam from all of us." She added a couple of colourful heart emojis to the post. Simply, put, the pictures have our heart.

Last year, Shilpa Shetty and Raj Kundra made a surprise announcement on social media, in which they revealed the arrival of the latest addition to the Kundra family - a baby daughter named Samisha. "Our prayers have been answered with a miracle... With gratitude in our hearts, we are thrilled to announce the arrival of our little angel Samisha Shetty Kundra. Born: February 15, 2020. Junior SSK in the house," read an excerpt from Shilpa's post.

Shilpa Shetty married businessman Raj Kundra in 2009. In terms of work, she was last seen as one of the judges on the TV reality show Super Dancer Chapter 3, alongside choreographer Geeta Kapoor and filmmaker Anurag Basu. The actress will next be seen in Sabbir Khan's upcoming film Nikamma. She will also be seen in Hungama 2, co-starring Paresh Rawal, Meezaan Jaaferi and Pranitha Subhash.