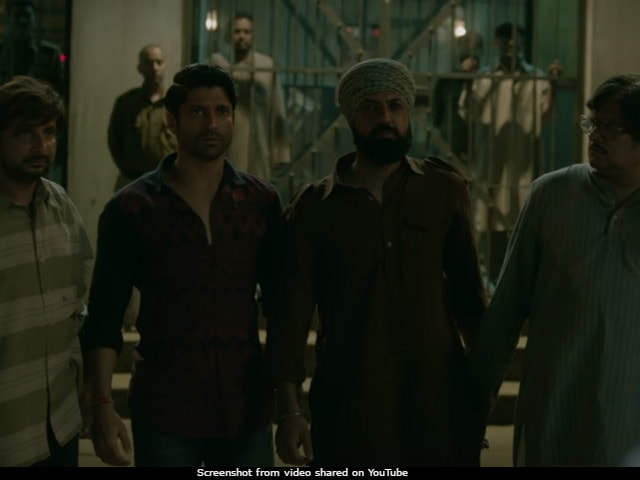 Teen Kabootar: A still from the song (courtesy YouTube)

New Delhi: Farhan Akhtar's Lucknow Central dropped a new song Teen Kabootar on Wednesday and well, it's quirky of sorts. Farhan features as accidentally accused criminal Kishan Mohan Girhotra, who also harbours dreams of becoming a singer. The trailer has already revealed how he gathered a team full of people to make a band inside the jail and the new song is an example of the band's creativity. "Teen Kabootar ki guttar gu ho chuki hai ab shuru," Farhan wrote on Twitter while sharing the song. In the song Teen Kabootar, Kishan Mohan features with characters played by Gippy Grewal, Deepak Dobriyal, Rajesh Sharma and Ravi Kissen. Ronit Roy, who plays the antagonist, also features briefly in the song.

From the trailer we know that qaidi no 1821 is not only pursuing his musical aspirations but also devising a plan for the great escape. Kishan and his team of band members are working towards their own show inside the jail - during when they plan to abscond. Ek Kabootar appears to be an audition of sorts from the band members, who will either be permitted for the penultimate performance or will have to head back to their cells. The lyrics of Ek Kabootar are suggestive enough that the band members are rejoicing their anticipated freedom and brushing up their plan in the form of a song.

Diana Penty plays the role of NGO worker Gayatri Kashyap, who encouraging the jail inmates to participate in recreational activities and also features in the song.

Promoted
Listen to the latest songs, only on JioSaavn.com
Watch Teen Kabootar from Lucknow Central here:


Directed by Ranjit Tiwari and Nikkhil Advani, Lucknow Central is scheduled to arrive in theatres on September 15.