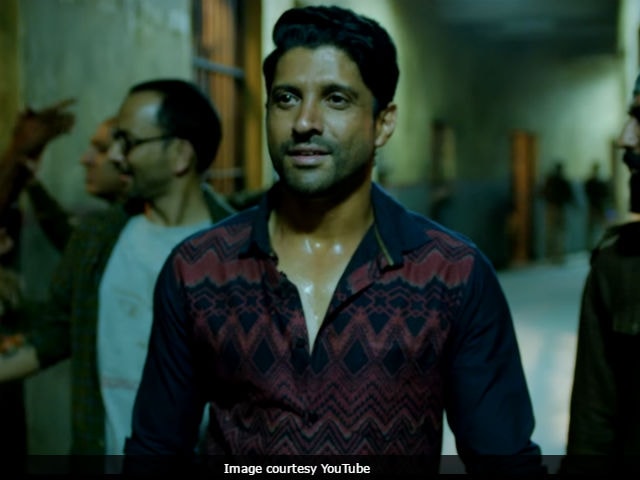 Lucknow Central: Farhan Akhtar in a still from the film

New Delhi: The trailer of Farhan Akhtar's much-talked about movie Lucknow Central has been unveiled by the makers of the film today. The two-and-a-half minute trailer shows how Kishan Mohan Girhotra (Farhan Akhtar), a man who hails from Uttar Pradesh's Moradabad, dreams of having his own music band but lands up in the Lucknow Central jail on charges of murder. However, Kaidi no. 1821 doesn't give up on his dreams. When he comes across a NGO worker Gayatri Kashyap (Diana Penty) , who wants to form a band of prisoners for a band competition that will be held in the jail, Kishan devises a plan to escape. At the end, he is left to choose between his dreams and freedom.

Lucknow Central is inspired by true events. The film has been directed by Ranjit Tiwari and Nikkhil Advani.

The makers of Lucknow Central unveiled two posters of the film ahead of the trailer release.

Diana Penty in a statement said that she instantly agreed to be a part of Lucknow Central when Nikhil Advani approached her, reported news agency PTI.

"I have always wanted to be a part of stories that I feel strongly about and Lucknow Central is one such story. I instantly said yes to it when Nikhil Advani (producer) told me about it," she said in a statement, reported PTI.

Promoted
Listen to the latest songs, only on JioSaavn.com
"Playing a character that holds her own in a film that has some of the finest actors from our industry, makes it even more special for me," PTI quoted the 31-year-old actress as saying.

Lucknow Central is scheduled to release in theatres on September 15. (With PTI inputs)