If Priyanka Chopra Had Worn The Red Swimsuit In Baywatch, She Would Have Looked Like This

"Baywatch revisited and this time as life guard," read a comment 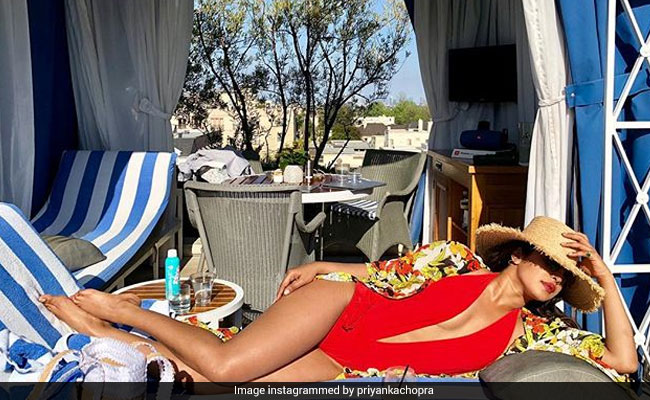 New Delhi: Priyanka Chopra is in California and is chilling like boss lady. The 35-year-old actress updated her Instagram stories and feed with entries from her trip to Beverly Hills with her chilling pal producer Mubina Rattonsey. But there's one photo which is making us very, very envious. Priyanka can be seen soaking up the California sun in a scarlet swimsuit - her beach-side look complete with a hat, a cape and that red lipstick. A part of Priyanka's Instafam thought that this photo provides an idea of what Baywatch may have looked like had Priyanka starred as Dwayne 'The Rock' Johnson's fellow life-guard. "Baywatch revisited and this time as life guard. Red hot. Post more please. Particularly, a slow-mo running video on beach in the lifeguard swimsuit," read a comment while others said Priyanka's photo gave off major: "Baywatch vibes."

True indeed. Check it out yourself.

Priyanka Chopra made her Hollywood debut last year with beachside drama Baywatch - she opted for quite the unusual choice, playing the shrewd villain Victoria Leeds.

#Repost @priyankachopra: It's finally here! #Baywatch is now playing at theatres in the US... Watch now and tell me what you think! #LinkInBio

Priyanka also recently made a fabulous appearance at the Met Gala in New York and ahead of her stop in LA, Priyanka was spotted on a family vacation with her mother Madhu Chopra and others in Florida. Here's a look inside Priyanka's fam-jam.

Keep smiling! @madhumalati love u.. sending love to all the mothers who are and were and all the mothers to be.. you are greatly appreciated #happymothersday Pic credit @chandraashwin

Promoted
Listen to the latest songs, only on JioSaavn.com
Priyanka Chopra, a bona-fide Hollywood star now, has two more international releases lined up - Isn't It Romantic? and A Kid Like Jake. She currently headlines American TV series Quantico, the third season of which is ongoing. Priyanka, who plays CIA agent Alex Parrish in the FBI series, will reportedly quit the show after this season.

Meanwhile, Priyanka has also announced her next Bollywood film to be Ali Abbas Zafar's Bharat, which also stars Salman Khan. Bharat is expected to release in June next year.