Baywatch Movie Review: Baywatch is a film so incompetent that it can't be saved by Dwayne 'The Rock' Johnson, one of the most charismatic action stars of all time 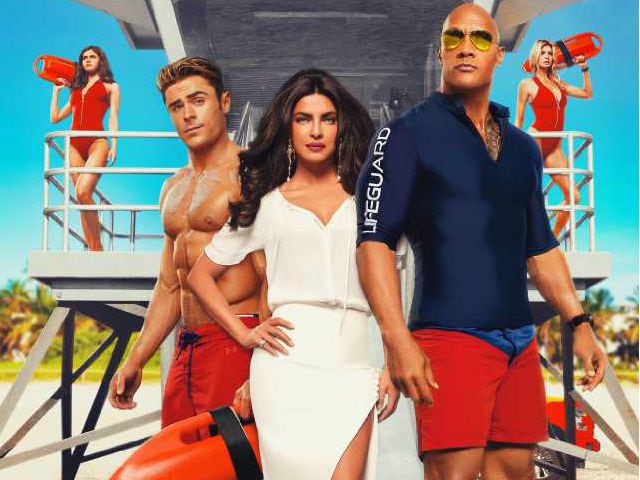 First and foremost, I believe we must applaud the generosity and graciousness shown to the entire Baywatch team by the chief of India's censor board, Shri Pahlaj Nihalani. At a time when actresses and writers squabble over additional credits in the movies, Nihalani has gone above and beyond any conceivable call of duty and actually re-edited this entire film, dropping, among other things, every word for breasts in a film about breasts. In the process, he has turned a monstrosity into a monstrosity with avant-garde jumpcuts, a veritable A Booty De Souffle. Yet - I double-checked - Baywatch doesn't give Nihalani credit either for Editing or Screenwriting or Co-Directing, showing us how thanklessly the man scissors on. Bravo.

Baywatch was never a good television show, but it was definitively sultry. The iconic opening credits featured pneumatic castmembers, culled from many a centrefold, running across sand and diving through water in excruciatingly slow motion. The show was about a team of lifeguards unwisely (and titillatingly) playing detective with all manner of random seaside intrigue. David Hasselhoff, who we already hated from Knight Rider because he got the talking car every boy wanted, was in it, surrounded by statuesque women with fun-to-pronounce names, like Erika Eleniak. It also starred Pamela Anderson, Playboy's most repeated covergirl of all time (and a woman I once met and will never stop bragging about). The world has changed. These days, Ms Anderson writes poems about Wikileaks founder Julian Assange. These may not win her literary applause, but they are a darned sight better - and more clearly intentioned - than the Baywatch film, a disjointed and unnecessary affair without a single memorable joke, or even a memorably filthy one. There is exactly one relatively funny running gag in this film, wherein The Rock refers to Zac Efron by a bunch of boyband names instead of the name of Efron's character, and this is stolen from the sitcom Scrubs.

Dwayne 'The Rock' Johnson plays Lieutenant Mitch Buchannon, king of the lifeguards. Oddly enough, the film reveals that his mentor was a lifeguard also known as Lieutenant Mitch Buchannon (Hasselhoff), which suggests a fascinating, Phantom-esque successor trail. Picture a beach where an ageing Mitch, before putting on a flowery shirt and tanning himself orange, first finds a fit successor with suitably oversized pecs, then christens him Mitch Buchannon. This carries on, ad infinitum, and thus are beaches forever safe. The Ghost Who Swims. Now that'd be a film.

Instead, director Seth Gordon gives us an uninspired retread of the old show with Johnson as Mitch, Alessandra Daddario as Summer, Ilfenesh Hadera as Stephanie and Kelly Rohrbach as CJ Parker - and no, the new CJ does not do justice to Anderson's slow-motion legacy. Efron, as new kid on the block Matt Brody, plays a queasy Olympian struggling under Mitch's shadow. The villain of the piece is Priyanka Chopra, vamping it up and having fun swearing like a sailor. Playing an attractive drug-dealer, she cannily uses this film to deliver a barely-disguised showreel to studios in need of a baddie. "I'm not a Bond villain," she even says, perhaps prophetically, in as many words, "Yet."

Promoted
Listen to the latest songs, only on JioSaavn.com
I desperately wanted Baywatch to be a laugh. Alas, even Johnson, to my mind one of the most charismatic action heroes of all time, can't keep this shipwreck afloat. Efron, usually enjoyable, is dragged down by a painfully puerile script. To be fair, he does have a couple of vaguely amusing lines in the trailers, but, thanks to Mr Nihalani, they are nowhere to be heard in theatres. Similarly, Chopra doesn't get to say her attitude-soaked "Easy, Britney" line - a quip I rather enjoyed in the trailer, aimed at a cross-dressing Efron - in our theatres. The scene, like many, has vanished. If you are have made up your mind about watching this film, don't do it on the big screen in India. In fact, considering how insipid the cinematography is, you might as well watch this at home.

I suggest you avoid this moist mess. The reason the Baywatch series became such a sensation - only outside of the United States, mind you - was that for many countries, this was one of the hottest things we could watch while pretending there was a plot in there somewhere. This was a time before the internet, or at least before the World Wide Web allowed us to download images fast enough. "I'll be there," as Hasselhoff sang during those unforgettable opening credits, was a promise that Baywatch would bring us sun and skimpiness and spunk. Now it feels like a threat.