Salman Khan's Bharat will be directed by Ali Abbas Zafar 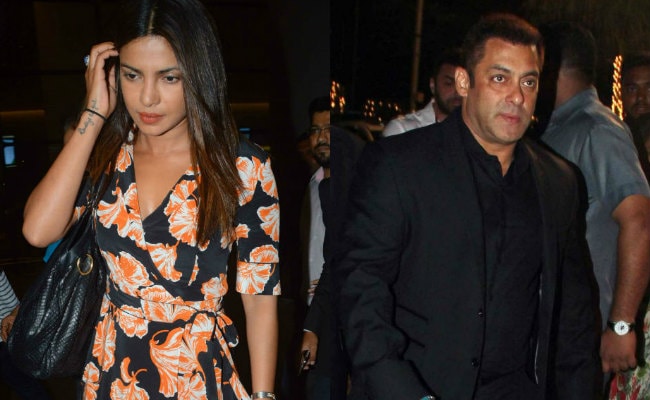 New Delhi: Busy star Priyanka Chopra has finally zeroed in on her next Bollywood project. It is the Ali Abbas Zafar directed Bharat, which also stars Salman Khan and will be produced by Atul Agnihotri and Bhushan Kumar. "I'm looking forward to begin shooting this film and working with Salman and Ali again after a considerable time. I've learnt a lot from them in our previous collaborations and am excited to see what this one has to offer," Priyanka said in a statement, reported news agency PTI. Salman Khan has consistently been booking the Eid slot for his film releases for a while now and Bharat will be no exception. It's slated to hit screens on Eid next year.

This will be Priyanka Chopra's first Bollywood film after 2016's Jai Gangaajal. "I'm also looking forward to working with Alvira and Atul and the entire team of Bharat. To all my well-wishers who've been so patient and supportive, thank you for your constant support," Priyanka added in her statement. Priyanka and Salman are co-stars of Mujhse Shaadi Karogi, Salaam-E-Ishq and God Tussi Great Ho.

Ali Abbas Zafar, who has previously directed Priyanka in Gunday, explained his decision to get her on board. "Priyanka is the biggest Indian artiste internationally and she is a perfect fit for the film. Priyanka brings in outstanding acting as well as incredible international appeal to make the scale of the film bigger and even more global," he told PTI. Describing Priyanka's character as "the catalyst at the film's most important turning point", he said: "We needed an actor who could portray this in the best possible way." The director and producer met Priyanka in New York to brief her about the project and she instantly jumped on board.

Salman Khan is on the sets of Bharat in London already and this is what the director wrote on Instagram recently: "Journey of a man and nation together." Ali Abbas Zafar also shared a photo from the first day of shoot and sort of revealed one of Salman's look for Bharat.

While Salman is on Bharat sets, Priyanka Chopra is currently gearing up for the third season of her American TV show Quantico, which premieres on April 26. She is currently shooting for the third season in Dublin, where she's been joined by her mother Madhu Chopra. Priyanka, who shuttles between the US and India throughout the year, may quit Quantico after the third season for her commitments to Bharat. "Priyanka was quite taken by the script of Bharat. What also added to her excitement was that it would give her the chance to team up with Salman after a decade. But she's not signed on the dotted line yet," mid-day reported a source as saying.

Priyanka also made a blink-and-miss appearance recently in the trailer of A Kid Like Jake, her second Hollywood project. She made her Hollywood debut with last year's Baywatch and also has her third international film Isn't It Romantic? in the line-up.

Promoted
Listen to the latest songs, only on JioSaavn.com
Can't wait to see Priyanka Chopra and Salman Khan together on screen !